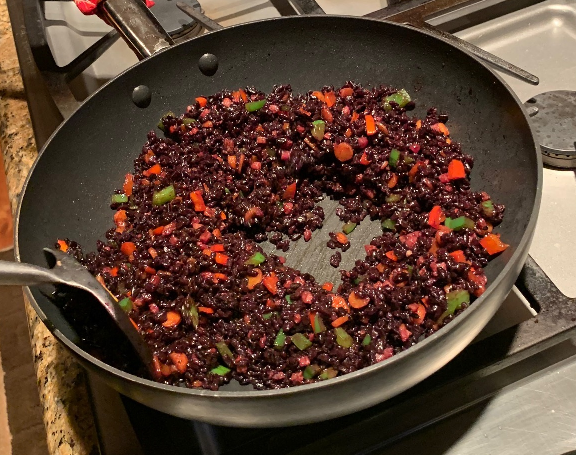 Yesterday marked the second New Moon after the Winter Solstice, and hence, the Lunar New Year or Chinese New Year of 4720, the Year of the Tiger.  According to Chinese astrology, children born in the Year of the Tiger will be imbued with character traits of bravery, competitiveness, unpredictability, and confidence. They are very
charming and well-liked by others. But sometimes they are likely to be
impetuous, irritable, and overindulgent.  Personally, I’m a Horse, so I wouldn’t know such things.  However, I do understand overindulgence and this recipe might very well be an example.

First, what is Forbidden Rice?  That’s a colloquial term for black rice, or more accurately, purple rice, so-called because during the era of ancient Chinese dynasties, only the Emperor and his family were allowed to eat it due to its rarity and high nutritional value.  However, some food historians dispute this claiming it was the Greeks who designated it “forbidden” in the Middle East because they believed it gave their enemies special powers.

Black Rice is an heirloom rice, meaning that it is open pollinated, grown at earlier times in history and not cultivated on any mass scale in modern times.  But that’s changing.  Because it is unprocessed with the bran intact, it contains high fiber, has a lower glycemic index than brown rice and is outright delicious.

To celebrate the Chinese New Year, I made my dish of Wasabi Turkey Bundles with Hot Mustard Dipping Sauce, found here, and created this dish with cubed Pancetta because I happened to have some in the fridge with a fast approaching expiration date.  My Number One Fan insisted I capture and post this recipe for posterity and repeats.

You can order black rice via the Internet or buy at most any Asian market, but I predict it won’t be long before major grocer retailers begin carrying it as it is gaining in popularity.

The Recipe
Place the rice in a small sauce pan with a tight fitting lid, add the beef stock and stir. No need to add salt as the beef stock will give you all the sodium and flavor you need. Bring the stock to a rapid boil over high heat, then drop the heat to its lowest setting and allow the rice to simmer until all liquid has been absorbed, about 30-35 minutes.

When all the liquid has been absorbed, turn off the heat, but allow the pan to sit undisturbed for fifteen minutes.  Remove from the heat, fluff with a fork, and place the rice in an uncovered dish, then refrigerate for at least three hours; overnight is even better.  Drying the rice in this fashion will allow the grains to absorb the flavors more readily during the cooking process and keeps the mixture from becoming mushy.  Do be careful.  After you cook black rice, you’ll see why it is also called purple rice.  Any liquid left behind becomes a powerful purple dye.

In a large skillet or wok, sauté the pancetta cubes over medium high heat until browned, about ten minutes.  Toss in the carrots and sauté for five minutes; then add the two bell peppers and sauté another five minutes.

Add the rice to the pan, and using a spatula or a Chinese chow, continually keep the mixture in motion to prevent it from sticking or burning.  Cook about ten minutes until the rice is heated thoroughly.  Half way through, add the soy, oyster and Sriracha sauces.

At the last minute, toss in the chopped green onion and stir to combine.  Although we did not on this occasion, serve with rice wine vinegar on the side or add a splash or two at the last minute.