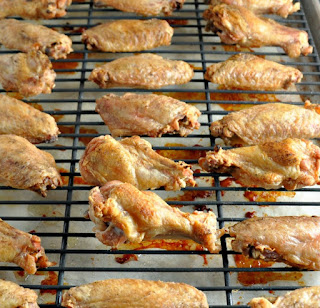 I cannot remember when Chicken Wings became such a big deal.  They were something barely tolerable when I was growing up and my parents (generally, my dad) would fry up a mess of Southern Fried Chicken, which meant chicken pieces dredged in seasoned flour and fried in a cast iron skillet with Crisco until deliciously brown and crispy, and then invariably served with mashed potatoes, cream gravy (made in the pan from the crispy bits left behind), buttermilk biscuits and some damned green vegetable that I’d be made to eat along side the best of the stuff on the table.  But the point is, the wings were almost always left over as the least desirable parts.  Breasts, thighs and legs, or drumsticks as we always called them, were the first you would reach for after mom was served first (a table rule at our house).

The first I ever heard of Buffalo Chicken Wings (admittedly at the time I hadn’t traveled much outside of the southern U.S.) was in 1983 or thereabouts while working in the restaurant business and we put them on the menu as an appetizer.  My boss at the time, who was from Ohio and more traveled than I, explained they were a big deal up north and were meant to be served along side celery and carrot sticks, dipped in Blue Cheese dressing.  We were in Atlanta and frankly, they didn’t sell well at the time.  The aforementioned Southern Fried Chicken, in all its regional Georgian glory, was much more sought after, and we ultimately took it off the menu.

But something happened in the 1990’s and Buffalo Chicken Wings became the rage, spawning whole restaurant chains that specialized in the fare.  But the original “Buffalo” flavor of the wings – really just a concoction of melted butter and hot sauce (the original from the Anchor Bar in Buffalo, New York used Frank’s Louisiana Hot Sauce) – became passé and all manner of other flavors came on the scene.  Just Google “chicken wing recipes” and you’ll be overwhelmed at all the variations.  By the way, I think it is ironic that something named after one of the northern most metropolitan cities in our country got its major flavor component from a hot sauce made in the Deep South of Cajun country Louisiana.

At some point in the not too distant past, My Number One Fan came home with a bottle of sauce intended for chicken wings.  We are huge fans of Stubb’s products, and I personally think Stubb’s Barbecue Sauce is the best on the market as I have reported elsewhere in this blog.  Stubb’s Beef and Chicken marinades are just sublime, and I highly endorse them.  In fact, I do not grill a steak anymore that I haven’t marinaded in Stubb’s Beef Marinade.

Apparently, Stubb’s was entering the Chicken Wing sauce craze, and paired their latest product, Stubb’s Wicked Wing Sauce with one of their other more established products, forcing you to buy the two together, admittedly a pretty good marketing ploy.  It worked.  The Wicked Wing Sauce hung around our pantry for a couple of years when I decided I would try it.

Originally, I was going to marinate chicken wings in this sauce, and then throw them on the outdoor grill, but the weather wasn’t cooperating.  Then, my Number One Fan looked at the ingredients of the bottle when I noticed the word “Inferno” on the label.  The second ingredient after water was Habanero peppers.  I probably could have taken the heat, but my Number One Fan could not, and honestly, I wasn’t in the mood for anything too spicy on this occasion.  A little heat, fine.  But I didn’t want to be sucking on a fire hose after dinner that evening.

So, I started to rummage through the Internet to find an alternative method to indoor cooking of the wings and ran across more than several recipes claiming baking powder was the secret.

Baking powder?  Yes, baking powder.  With apologies to the website claiming to have discovered this secret, along with an explanation of the food chemistry as to why this method works, I lost the damn URL and cannot relocate it today. However, there are dozens of repeats of the original author’s method and none of them have jacked around with the original two-step cooking process.  So, follow this recipe to the letter and I promise you will not be disappointed.

As usual, however, I made a slight variation.  The original recipe called for just baking powder and salt.  I thought that missed an opportunity for a little additional seasoning, so I used a staple from my spice rack, Morton’s Nature’s Seasoning, the first two ingredients of which are salt and pepper.  I therefore didn’t think I was taking any huge risk with this variation, although the original author said you can use any number of spices along with the baking powder, but based on his extensive research, if you added any seasoning other than salt to the baking powder mixture, you also needed to be prepared to see some reduction in the crispiness of the final product.

Without boring you with the food chemistry behind the two-step cooking process, the first step apparently removes some of the moisture and fat from the chicken, while the second step is the real cooking part that gets them deliciously crunchy.

As for the baking powder, it prompted me to ask just what is baking powder and is it different from baking soda?

Okay, real quick on this:  they are different, but baking powder contains baking soda.  Baking powder, and baking soda for that matter, are alternatives to yeast to get your dough to rise in the oven.  Yeast are living microbes and provide lift to a cake or bread when you feed it sugar.  The yeast produces carbon dioxide gas as a bi-product, which creates the lift.  The same effect occurs chemically with baking powder or baking soda.

Do you happen to remember as a kid when you learned about acid and alkaline?  Do you recall the experiment when you combined baking soda (an alkaline) with vinegar (an acid)?  It created a volcano of foam (again, carbon dioxide gas) that was admittedly pretty neat to watch.  Well, baking powder is just baking soda that already contains the acidic ingredients that will create a lift in batter or dough once activated with heat and moisture.  But do not, for purposes of this recipe, confuse baking powder with baking soda.  For recipes that call for baking soda, that recipe must also call for some form of acidic ingredient to create the chemical reaction that releases carbon dioxide, and this is usually buttermilk.  Baking powder is self-contained with nothing more needed to create the carbon dioxide lift. It also contains corn starch as a stabilizer to keep the ingredients inert until added to your recipe.

What does the chemical reaction of producing carbon dioxide have to do with creating crispy chicken wings?

Everything!  But enough with the science.  Just trust me that it works.

Here is the very simple but effective recipe to create damned delicious and crispy chicken wings in your oven.  I am including the sauce I made for this event, which you can either serve on the side, or coat your wings before serving.  My Number One Fan did the former while I did the latter. Or you can create any number of other flavored sauces to your liking.

One final comment on the cooking method:  it is a critical that you put your wings on a wire rack above the cookie sheet or sheet pan.  This is an important part of the methodology behind the two-step cooking process so that the oven’s hot air circulates around the chicken. It is equally important that the first cooking step is done in the lower middle part of your oven, while the last step is completed in the very top rack of your oven.  Hey, don’t jack around with science!

Compliments of Betty Crocker’s website, I am also including a short tutorial in how to cut chicken wings into its two primary parts.  I never did it before last night, but found it really easy with a sharp butcher knife.

And, one more thing.  Does this cooking method work with other pieces of chicken, or even other kinds of foods? Beats me, but stay tuned because I will be experimenting!

The Recipe
Sometimes, grocery stores will sell chicken wings already cut into their parts, but if not, proceed as follows:

Step One:  Place the wing face down on a cutting board and look for the bone joint between the tip of the wing and the “arm” of the wing.  The tip is a largely inedible part and is to be discarded.  Cut firmly between the joints to sever the tip.

Step Two:  Find the joint between the two remaining pieces of the wing.  This will be a little more difficult because the joint is a little larger, but wiggle your knife until you find the “sweet spot” between the two joints and firmly cut downward to sever the two pieces.

What you’re left with are two pieces of the chicken wing to cook.  The upper wing is a single bone often referred to as the little drumstick.  The lower wing is double boned, not unlike your own forearm, which I guess is kinda gross to think about.

Pre-heat your oven to 250 degrees with the wire rack in the lower middle part of your oven.

Now, combine your carefully measured baking powder and your seasoning or salt & pepper and ensure they are well combined.

Rinse your chicken wings thoroughly, and this is important:  pat them very dry with paper towels.  The drier they are, they crispier they will become in the oven.

Toss your chicken wings in the baking powder mixture and ensure each piece is well coated.

Use a sheet pan or cookie sheet and I strongly urge lining it with aluminum foil as it will make for far easier clean-up.  Put one or two wire racks on top of the sheet pan or cookie sheet, enough to accommodate all of your chicken pieces so that they each have at least a one-inch clearance between pieces.  Circulation of the heated air in your oven is critical.

Hose down the sheet pan and wire rack with the non-stick cooking spray, then lay out your pieces, skin side up.

Cook your chicken pieces for 35 minutes in the lower middle part of your oven.

Then, move your sheet pan or cookie sheet of chicken wings to the uppermost part of your oven, and kick the temperature to 425 degrees.  Cook another 50 minutes from the moment you turn up the thermostat.  Don’t worry about waiting until the oven comes up to temperature to start your timer.

Remove from the oven when the chicken is a golden brown and crispy.  Allow it to sit uncovered for five minutes.

Serve tossed in any sauce you like, including the Asian Sauce and Italian Parmesan Sauce I present below, or serve with the sauce on the side.  If you want traditional style Buffalo Wings, mix equal parts melted butter with any hot sauce you like (or Frank’s Louisiana Hot Sauce for authenticity) and toss your wings in it, served with carrot stick and celery sticks with blue cheese dressing for dipping.

Mix all ingredients and allow to sit thirty minutes before serving.

Blend all ingredients to combine.  You should have the consistency of a creamy salad dressing.  Allow to sit for thirty minutes prior to serving.  It won’t take much to coat a few wings, so use sparingly.