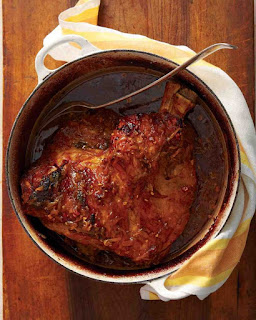 I will admit, I’ve been on something of a Pork Shoulder kick of late.  Much like Beef Short Ribs, I like the idea of cooking meat in a savory liquid, a technique referred to as braising.  I like it in part because it’s not terribly easy to screw up and is relatively simple to make.  As I did with my Beef Short Rib posting wherein I provide a repository of links to all Short Rib recipes that I’ve done, viewed here, I am also providing for your convenience a set of links to all Pork Shoulder Roasts recipes that I’ve posted thus far, to wit:

I have another dozen or so recipes made with other cuts of pork, including ribs, loins, and tenderloins, but this post and the embedded links are devoted to the Pork Shoulder Roast, otherwise called a “Boston Butt.”

On this “Black Friday”, however, our son was introducing us to his girlfriend (an especially nice lady, I might add), who would have had the traditional Turkey Day menu with her parents on the previous day.  So as to not make the poor girl have to choose between which set of parents were the better cooks, nor bore her with two turkey dinners in a row, I was gently persuaded to choose another entree.  Roast Pork seemed the logical choice.  And since my Number One Fan wasn’t about to give up her right to eat cornbread dressing over Thanksgiving, which she arguably likes even better than the turkey itself, I was left with this logical – and delicious – menu.  My cornbread sage dressing recipe, by the way, is the same I have previously posted for the more traditional Thanksgiving menu found here.

Now, a lot of pork and stuffing recipes on the Internet will have you using a pork loin, and actually stuffing the breaded dressing into the roast.  I thought that to be a terribly difficult and unnecessary thing to do, which wouldn’t have worked with a shoulder roast anyway.  My menu is infinitely easier and arguably better.

Ingredients for the pork roast

Ingredients for the cornbread sage dressing

The Recipes
First, make the pork roast:
Unless you bought the pork roast fresh from your butcher, it is likely Cryovac wrapped.  Take your roast out of the packaging and rinse under cold water.  Pat dry. On the fat side of the roast, slather on half of your olive oil, followed by a similar slathering of the minced garlic, then half of the apple sauce.  Finally, sprinkle on half the rubbed sage, salt and pepper.  Don’t do the opposite side of the roast just yet.

In a heavy Dutch oven with an oven-proof lid, heat up a good amount of olive oil over medium-high heat, and saute your sliced onions until they begin to take on a little color, 8-10 minutes.

Pre-heat your oven to 325 degrees.

When the onions have collapsed and start to caramelize, add the sliced apples.  Saute for 2-3 minutes longer, then spoon out all the vegetables from the Dutch oven onto a plate or in a bowl using a slotted spoon, and set aside.

Add more olive oil to the Dutch oven if necessary, and place the pork roast, fat side down.  This is the side you have previously prepared with the garlic, apple sauce and rubbed sage.  While that side is face-down in the hot oil, similarly prepare the non-fat side with the olive oil, minced garlic, apple sauce and rubbed sage.

Add the bay leaves to the cooking liquid and bring it to a simmer.  Put on the lid and place in a pre-heated 325-degree oven for 3 hours.

Next, make the cornbread sage dressing:
Heat the olive oil in a skillet, and saute the celery and onion until they have collapsed and are translucent. Do not caramelize. Add one stick of butter and allow it to melt, then add your mushrooms. If using fresh mushrooms, saute until the mushrooms have collapsed and are starting to turn brown.  If you’re using canned mushrooms, drain all the liquid off first, then add to the skillet and heat through.

In the meantime, put the cornbread and white bread crumbs in a large mixing bowl. Add the celery-onion-mushroom mixture and stir to combine. Add the sage, salt and pepper, beaten eggs, and stir to combine. Then, pouring the chicken stock a cup at a time, continue stirring the mixture until it all begins to clump together. You want your dressing very moist, but not runny. It will dry out some in the oven during cooking, so you want the dressing a little more moist than dry.

Use a casserole dish that has a lid and coat it with the non-stick
cooking spray.  Press the mixture down into the casserole dish so that
it is level, fairly dense and has an even consistency. Dot the top of
the dressing with the remaining 1/2 stick of butter. Cover and place
into a 325 degree oven for one hour during the last hour of cooking your pork roast.

Put the Dutch oven on your stove over medium heat, and using an immersion blender, emulsify the cooked onions and apples.  Be sure to remove the bay leaves first.  If necessary, add a little more chicken stock to the gravy.  I needed about a cup on this occasion.  As you emulsify, the gravy will thicken.  If you don’t have an immersion blender, use a regular blender, but be careful not to fill it more than 1/3 full at a time.  Very hot liquid like this expands rapidly when agitated and you do not want to burn yourself.

Is the gravy thick enough?

At this point, you can do one of three things: (1) serve as-is; (2) add a tablespoon or so of flour dissolved in 2-3 tablespoons of water to further thicken and tighten the gravy (be sure to bring the gravy to a boil for at least a minute); (3) or do what I did: add an envelope of dried, store-bought pork gravy mix.  McCormick is probably best known brand.  Dissolve the mix in a cup of water, then add to the gravy and bring it to a boil for one minute. I will admit I caught some culinary grief for this, but I swear, it’s my secret ingredient and I think of it simply as pork-flavored flour.

Remove the shoulder blade from the roast and cut into thick slices, served along side the dressing with the gravy ladled over.