Swiss Steak in a Crock Pot 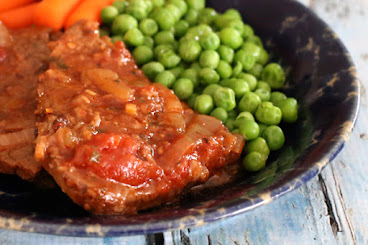 The great thing about the Internet is that there is a lot of information to choose from.  The bad thing about the Internet is there is a lot of misinformation to choose from.  Case in point here.  Search for a Swiss Steak recipe and you’ll find a very wide array of options, many of which scarcely resemble the original version of this recipe that was, according to the Encyclopedia of American Food & Drink, first published in 1915 and later became a staple of school cafeteria lunch menus and Sunday church potluck suppers in the ’50s and ’60s. Today, what constitutes a Swiss Steak has seemingly become horrifically convoluted.

One food blogger who shall remain nameless, boasts a three ingredient
“Swiss Steak” recipe that includes (and I quote): “Round or Swiss Steak,
Cream of ‘Something’ Soup and Sweet Onions.”  The author had the
audacity to call this Swiss Steak.  Ignorance on the Internet knows no
bounds.  So, let me try to clear up a little confusion.

First, to address the stupidity of the food blogger above, there is no cut of beef called Swiss Steak.  Secondly, pouring a can of “Cream of Something” into a Crock Pot with an unprepared cut of beef round and adding onions just sounds awful even if the author had the conviction to at least identify which kind of soup she recommends.  In any event, this is not Swiss Steak.  I’m not sure what it is, actually, but it certainly isn’t culinary art.

Let’s start with the cut of beef, and therein lies the reason for calling this dish Swiss Steak, which is not because it originated in Switzerland.  It didn’t.  The name of this dish is derived from the verb “swissing,” which is an English word that means to smooth out cloth between two rollers.  The implication here is that a Swiss Steak must be similarly treated.  The only two acceptable cuts for a Swiss Steak are the round or the sirloin.  One blogger’s recipe used chuck.  What he or she was essentially cooking was a pot roast, not Swiss Steak.

This is a dish that became popular late in the Great Depression and then in the WWII and post war eras because it used cheap, less desirable cuts of beef, and in order to make them tender before our more modern times, this meant you pounded the hell out the beef with a meat mallet before you cooked it. Or, as I’ve read on some websites, absent a meat mallet, cooks of the day would use the edge of a dinner plate.  These days, however, you can normally find what generally is referred to as “cube steak” or “minute steak”, where the butcher has run slices of top round or top sirloin through a tenderizer.  You’ve no doubt seen these cuts of beef at the supermarket, where the meat appears as if it’s been repeatedly scored through a machine.  If you buy a piece of top round or top sirloin that has not been treated this way, then you won’t be making Swiss Steak until you pull out your meat mallet.  Or a dinner plate.  This, then, would be the first defining characteristic of a Swiss Steak.  There are two more.

A Swiss Steak is braised, which is to say, it’s cooked in liquid for a long period of time.  Top sirloin to some degree, and top round for certain, are tough cuts of beef with very little fat. Scoring or pounding the meat with a mallet breaks down the meat’s tough muscle fibers. Braising the beef further tenderizes it, as well as adds flavor to an otherwise unremarkable part of the cow.  Luckily, this characteristic isn’t overlooked in virtually all online recipes but it is within the third characteristic that interpretation of this hundred year classic undergoes considerable bastardization of the ingredients in the braising liquid itself, which ultimately becomes the deliciously complex gravy that comprises the bulk of this dish’s flavor.

The original 1915 recipe used tomato, onion and green bell pepper, along with herbs of basil and oregano. The recipe that more probably catapulted this dish onto the American dinner table was published in a 1937 Better Homes and Gardens cookbook.  It added celery and carrots to the recipe, and substituted thyme instead of the more Italian flavors of basil and oregano. To be sure, nothing I have ever eaten called Swiss Steak was absent tomatoes, the inclusion of which makes the third and final defining characteristic.  Yet, there are hundreds of so-called Swiss Steak recipes that instead use a mushroom-onion based sauce.  Those folks are confused.  They have mistaken Swiss Steak for Salisbury Steak.  More on that here.

Now, there is nothing intrinsically wrong with beef that has been braised in a liquid with mushrooms and onions.  I just don’t happen to think you can legitimately call it Swiss Steak.  In the south, in fact, similarly prepared cuts of beef round simmered in mushroom onion gravy is referred to as “Smothered Steak.”

At the risk of sounding like I’m talking from both sides of my mouth, however, I made a point to include mushrooms in my version of this classic recipe and yet still hold true to the three defining characteristics that indeed make this Swiss Steak. I used red bell pepper, not green, mainly because that’s what I had on hand.  Given the choice, I probably would have used both.

salt and pepper to taste

If your beef has been prepared by the butcher as “cube steak” or “minute steak,” you’re good to go.  Dredge each portion in flour seasoned with salt and pepper, pressing the flour into the crevasses of the meat.

If your beef has not been scored by the butcher, dredge each piece through the seasoned flour and then use the pronged side of your meat mallet to hammer out each piece to about 1/2 inch thickness.  Dust with more flour as you go.

Heat the olive oil in a large skillet over medium high heat and saute each piece of steak about 2 minutes per side to a light brown.  Set the steaks aside on a plate, then saute the onion, bell pepper, carrots and celery until the onions begin to pick up a little caramelized color, 8 – 10 minutes.  Add the garlic and mushrooms and saute a couple of minutes more.

Place the steaks along with any accumulated juices into the bottom of a pre-heated Crock Pot.  Add the can of tomatoes, the sauteed vegetables and then all the liquid ingredients, thyme and paprika.  Give it all a stir and feel free to add a little more beef stock and/or white wine if you need more liquid.  You want the meat and vegetables submerged.

Cook on high for four hours and low for another two hours.

Swiss Steak screams for a starchy side dish like rice or noodles, and is wonderful with potatoes, like mashed Russets or in this case, red new potatoes that had simmered in chicken broth, then smashed on the plate.