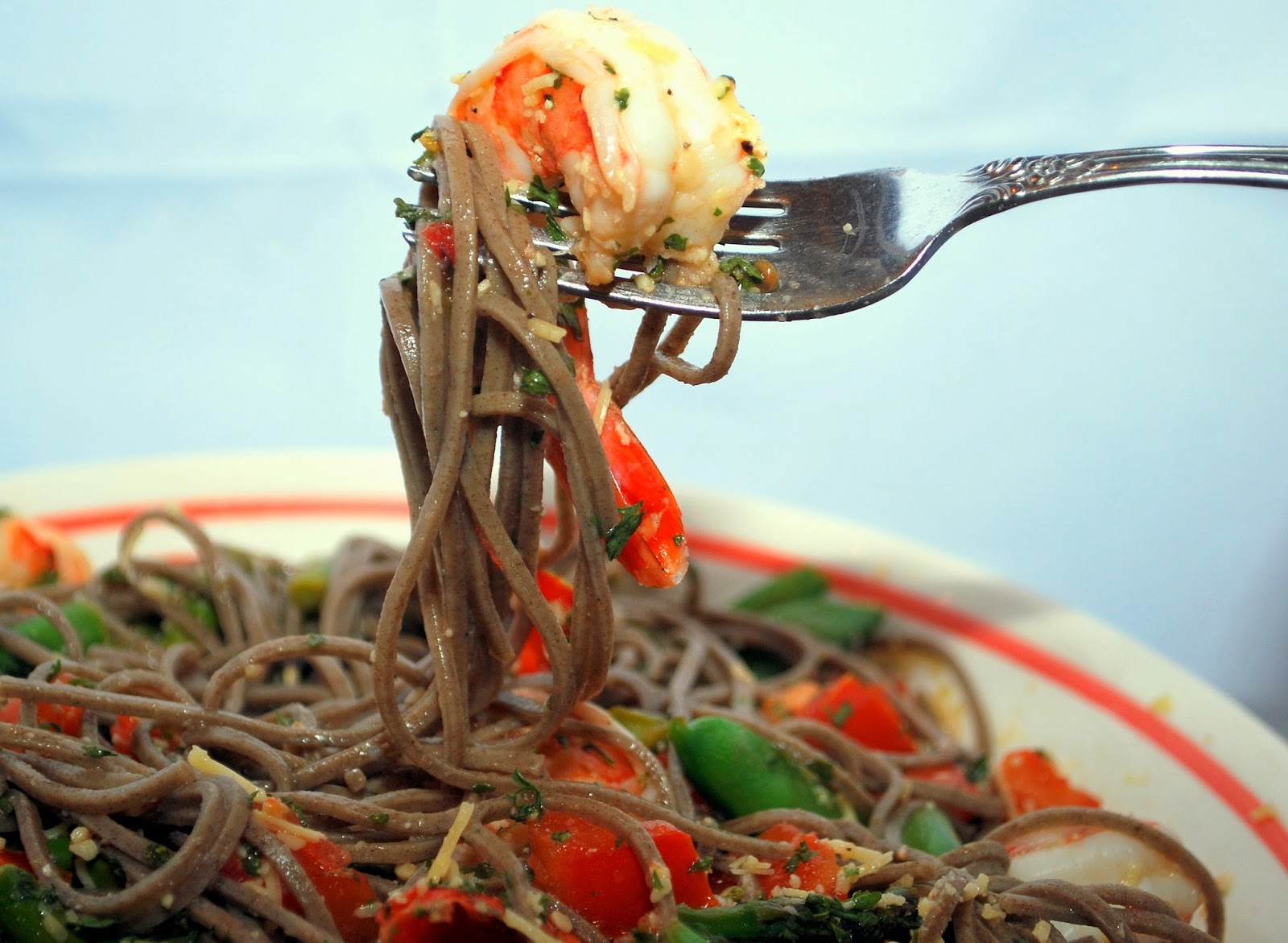 I always have frozen peeled, de-veined shrimp in the freezer and combining that ingredient with pasta seems to be my go-to dish when I’m in the mood for something relatively easy, fast and light.  It seems there are all manner of ways to combine these two ingredients based on the kind of pasta you might consider using and the other ingredients with which you combine them.  This is my fifteenth shrimp recipe to post, and fourth combined with pasta.  This dish is served hot, although it could be served cold, not unlike my Cold Asian Noodles & Shrimp recipe.  For reference, my other two shrimp and pasta recipes are Shrimp Scampi on Angel Hair Pasta and Linguini with Shrimp & Tomatoes.

Soba noodles are made from buckwheat which is not related to wheat at all.  It is a more nutritious grain, not a grass like wheat, and is gluten-free with an earthy, nutty flavor.  These noodles are generally eaten as a snack among Asian countries, rather than as a main course, and are frequently served cold along side a dipping sauce of soy sauce and rice vinegar, or in a broth with vegetables as a soup.

Ingredients
For the Sauce
2 tbsp cornstarch

3 tsp ginger, chopped (can be fresh or jarred)

Mix all of the ingredients for the sauce in a mixing bowl, and blend well.  Set aside.


Cook the soba noodles according to the directions on the package in boiling salted water, about six minutes.  Do not overcook.  Rinse under cold water through a colander and allow to drain well.


Heat the peanut oil over high heat in a wok or large skillet until shimmering, then push in the shrimp.  Add the garlic.  Chow the shrimp constantly so the garlic does not burn, and cook until the shrimp change color and become opaque, about three minutes. Remove the shrimp to a platter.

Add the shrimp back to the wok.  Add the noodles and the sauce, and stir fry until the noodles are heated through.  Throw in the cilantro at the last minute, stir to combine and serve.

You can top with a handful of chopped, dry roasted  peanuts at the last minute, or a handful of toasted sesame seeds for some added visual interest, extra depth and crunch.