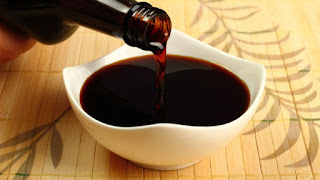 I can’t imagine a refrigerator without a bottle of soy sauce in it.  For our household, it’s a staple, like salt, pepper or ketchup.  It is readily available, versatile and admittedly underused in my daily cooking repertoire; more often brought out only when we order Chinese take-out but don’t want to exhaust ourselves opening those little, annoying plastic portioned packets of soy sauce that come with a picture of a panda on them. My dad used to call soy sauce “Dragon’s Blood” when I was growing up, which I always thought was kinda cool and perhaps explains my affinity for Chinese cuisine to this day.  Soy sauce, the fermented remnants of boiled soy beans, has been around since at least the second century and originated in China, but spread throughout the Asia-Pacific and Middle East quickly thereafter.  Today, its manufacturing is big business and regional blends of soy sauce can be found in Asian markets all over the planet.  It is the base for many Chinese dishes and one cannot fathom eating sushi without it.

Recently, I had occasion to use soy sauce in two recipes that I thought I would post today.  Last week, I had some friends over for a cocktail supper and served my Grilled Sweet & Spicy Shrimp as the anchor recipe.  Last evening, I had three plump, boneless, skinless chicken breasts that needed to be consumed and after a bit of Internet research, came up with my Asian Soy Poached Chicken Breast recipe. A key ingredient, of course, is soy sauce.  While there are now many brands to choose from, Kikkoman is perhaps most omnipresent and well known, and I subscribe to the low-sodium version.  You can use whatever soy sauce you like, and in fact, some of the lesser-known imported brands are quite good.  Dark Chinese soy sauce is very robust with an almost syrup-like viscosity.  Should you be using that type of soy sauce, cut back on the portion for these recipes.

For this recipe, you will need to purchase any available Asian chili paste presently on the market.  A common variety in our parts is from Huy Fong Foods, the same folks who make the very popular Sriracha Hot Chili Sauce.  That sauce in particular is too hot for this recipe, but Huy Fong makes two other concoctions that are milder.  One is a Chili Garlic Sauce; the other is without garlic, called Sambal Oelek, which is simply ground fresh chili paste.  Either is fine, but you will need to add minced garlic to the recipe if you use the latter, which I did.  Both products come with the trademark green lid and sport the company’s logo of a rooster.

The Recipe
I used a grilling pan and worked over the stove for this recipe.  You can grill the shrimp in other ways and it won’t matter to this recipe.  But since I was entertaining, I didn’t want to leave my company by going outdoors to the grill, so a grilling pan worked just fine.  The key in so doing, however, is to get your shrimp very dry by squeezing out any excess water with paper towels.  Then, coat the shrimp in the vegetable oil, and carefully lay them out in a pre-heated grilling pan over high heat.  Cook the shrimp 3-4 minutes on each side until they take on a few grill marks.

When the shrimp are done, toss them in the sauce to thoroughly coast and serve.  You could make this as an entree and serve with steamed white rice, or you can serve as I did, as a course in a cocktail supper and spooned over thin slices of ciabatta bread.  The sauce-soaked bread slice was particularly good as an ending to the snack.

Having three very nice, plump, boneless, skinless chicken breasts, I wanted something with an Asian flare and ran across a recipe for honey and soy glazed chicken drumsticks on a cooking website called Rachel Cooks.

In her version, the sauce is more of a marinade and basting sauce that gives the chicken drumsticks a mahogany glaze.  I took her basic concept, amended the ingredients and used this sauce as a poaching liquid for the chicken breasts roasted in a hot oven.  Served with some Basmati rice and plenty of the resultant gravy, I was quite pleased with the results.  I also used a bit of the aforementioned Sriracha Hot Chili Sauce.  You can omit this, or substitute a dash or two of Tabasco Sauce.

The Recipe
Pre-heat oven to 400 degrees, and ensure the rack is set at its highest level in the oven as will accommodate your roasting pan.

Whisk together the sesame oil, vinegar, soy sauce, honey, ketchup, carrots, green onion, garlic and Sriracha Sauce.  Treat a 9″ x 13″ baking dish or roasting pan with non-stick cooking spray and arrange the chicken breasts in the pan with the seam-side of the breasts face-down.  They shouldn’t sit too snugly; you want the liquid to circulate around the meat.

Pour the sauce over the breasts and allow them to sit for 20-30 minutes to marinate while the oven comes up to temperature.  The sauce level will reach about half-way over each chicken breast.

Place the baking dish in the uppermost section of your oven, and cook for 40-45 minutes.  Serve over Basmati or Jasmine rice, with plenty of the sauce spooned over.

I accompanied this dish with some freshly sliced cucumber, prepared in a bit of sour cream with some honey-ginger vinegar I happened to have on hand, then garnished with some dried dill weed.  This seemed to be in perfect balance with the chicken and its tangy gravy.