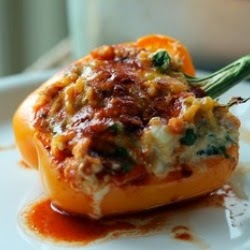 I have no idea where I got this recipe, but I’ve had it filed away for some time.  Stuffed bell peppers were a staple on our table when I was growing up.  I suspect that was because bell peppers were cheap and my dad even grew them in our backyard garden in the summer.  The ground beef pepper stuffing was always augmented with some kind of starch, usually rice, although my mom on occasion would use Quaker oats.  The idea, of course, was to extend the reach of the priciest ingredient:
the ground beef.  But to be sure, the peppers were always green and
were always hollowed out from the top.

For my version, I chose to use an orange bell pepper and sliced it length-ways in half.  Served with some sauteed snow peas and you have a reasonably elegant version of an old childhood classic. You can use yellow bell peppers if you wish, and green is still always a good choice.  I think red bell peppers would be too sweet, however.

The original recipe I found did not call for it, but I used one cup of rice among my ingredients. You either need to use cooked rice, or you can use the microwavable kind, only you do not actually need to microwave before adding to the stuffing mixture.  Microwavable rice is par-cooked and will finish nicely in the final cooking process with this dish.

As an aside, should you be low-carbing it as I often am, Green Giant makes a frozen product called “Riced Cauliflower.”  It makes an excellent low-carb substitute for the rice, gives you similar texture and does not noticeably alter the flavor of the dish.

In a pot large enough for the six pepper halves, bring salted water to a rolling boil.  Then, drop in the bell peppers and cook for three minutes.  Remove, drain, and immediately put them into a bowl of ice water to stop the cooking process. When completely cooled, remove peppers from the water bath and dry thoroughly.

Add the olive oil in a large skillet over medium heat, saute the chopped
onion and celery until the onions are translucent but not browned.  Add the ground beef and saute until no pink color remains. Drain off any excess fat, then, add the rest of ingredients except
the tomato paste, cheese and the bell peppers.  Stirring frequently, simmer over medium heat for ten minutes or until most of the liquid has evaporated..  (By the way, my Number One Fan advises against the use of too much yellow mustard).  Add the tomato paste and incorporate thoroughly into the mixture.  Cook for another minute or two.


Remove the meat mixture from the stove and add 1/2 of the sharp cheddar cheese. Stir the mixture until the cheese melts through.  Allow the mixture to cool slightly, then fill each pepper cup with the mixture and top with the remaining cheese.

Place the pepper halves in a shallow baking dish dusted with some cooking spray. Bake them at 375 degrees for 50-60 minutes until bubbly and slightly browned.