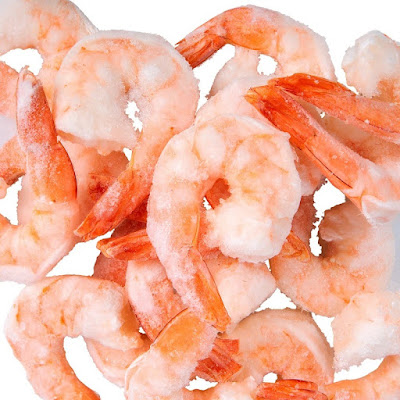 This was one of those days when I was going to make dinner from whatever ingredients were on hand in our freezer, refrigerator or pantry.  I just wasn’t in the mood for dodging shopping carts and dealing with unsupervised children at the grocery store.  After a couple of hours on the Internet seeking inspiration, these are the recipes I created using a one-pound bag of peeled, de-veined and cooked jumbo shrimp. 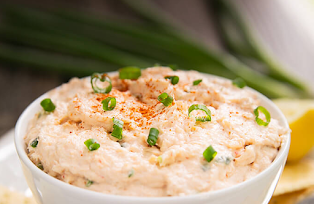 A lot of shrimp dip or shrimp spread recipes are available on the Internet.  Some are cold, others baked and almost all of them are designed for dipping with chips or spreading on savory crackers.

Since my Number One Fan and I are watching our carbs, I created this recipe specifically for spreading on my Cloud Bread Blinis, the recipe of which can be found here.  This spread would still work, of course, on crackers or with chips, but I used whipped cream cheese, which is infinitely easier to mix into the recipe and to spread on my delicate Cloud Bread.

Other low carb alternatives to making Cloud Bread would be to serve this dip with celery sticks, round slices of cucumber, or more elegantly, individually stuffed leaves of Belgian Endive.

There also seemed to be a number of shrimp recipes on the Internet that were to be made with tiny canned shrimp.  Somehow, and I’m not sure why, the idea of using tiny shrimp that have been sitting on a shelf in a can gives me more than a passing frisson of revulsion. I much preferred a shrimp product that I knew had been freshly caught and cooked, then flash-frozen, all within a matter of hours.

Thawing frozen cooked shrimp is easy and quick.  Just put them in a colander under cold running water.  Toss the shrimp occasionally to be sure all of them are getting their bath and the thawing process takes about fifteen minutes.  Dry the shrimp on paper towels and keep them refrigerated until ready to use.

The Recipe
Remove the tails from the shrimp and place them in a food processor. Pulse 6-7 times until the shrimp is finely minced, but do not pulse so much that you liquefy them.

Combine the cream cheese, mayonnaise and lemon juice in a mixing bowl and use a whisk to ensure the mixture is homogeneous.  Add the parsley, garlic salt and lemon pepper and mix again.  Fold in the shrimp until well distributed throughout the spread.  Chill for an hour before serving.

And might I say, not only did these go exceptionally well with my Cloud
Bread Blinis, but also with several ice cold shots of Russian Standard
Vodka.

This is my third recipe to use a product called Crepini Egg Thins or Crepini Egg Wraps.  There seem to be different names for the same product, or perhaps because they’re new, they are still trying to identify their market niche. 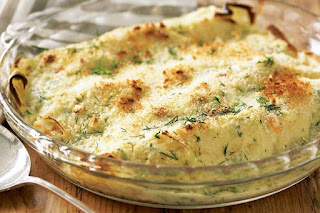 They are carb free, delicate yet durable and I used an adaptation here of the first recipe in which I used the Crepinis found here, called  Low Carb Chicken Spinach Mushroom Crepes.

The one error I made in this creation was using Gruyere cheese as a topping.  While that sounded good, the Gruyere has a high melting point and it wasn’t delicate enough for the crepes.  My first inclination was to use an Italian blend of cheeses, which typically contain mozzarella, Parmesan, provolone and Romano.  My first inclination would be been the better choice and the recipe here has been corrected as such.

The Recipe
Remove the tails from the shrimp and cut each one into thirds.

In a skillet over medium high heat, melt the butter and saute the green onions for five minutes until limp.  Add the garlic and saute a minute more.

Add the mushrooms and saute for another couple of minutes.  Toss in the shrimp, sherry, Worcestershire, heavy cream and cream cheese. Season with salt and pepper.  Bring everything to a simmer, then remove from the heat and allow to cool for ten minutes.

Divide the shrimp mixture into six equal portions, and then spoon each portion onto one crepe.  Roll the crepe away from you and place it seem-side down in a casserole dish that’s been sprayed with non-stick spray.  Complete this task for the remaining crepes.

Top with the Italian cheese blend and bake for 20 minutes until the cheese has melted and has become slightly browned and bubbly.