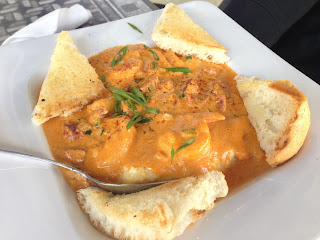 We happen to have had some cheese biscuits hanging around from an earlier dinner.  Say what you will about scratch baking, the packaged biscuit mixes being produced these days are pretty easy and pretty good, not that Bisquick was ever a bad way to go.  I don’t eat at Red Lobster, but they do happen to have a legendary cheese biscuit that is now being mass-produced.  They require very little in the way of skill to make; you just follow the bloody directions!  You combine the flour mix in the package with milk, water and cheddar cheese.  Drop the biscuits on a sheet pan and bake according to the directions.  Split open right out of the oven and topped with this shrimp recipe and you’re in heaven.  If your biscuits are a few days old, cut them in half, slather on some butter, and put them under your oven’s broiler for about a minute.

Étouffée  is a Cajun word meaning “smothered.”  “Smothered” is a southern manner of preparing food that is left bubbling away in a rich cream gravy.  The richness of the gravy comes from starting it with a roux.  As readers of this blog will have already learned, a roux is a concoction of equal parts butter and flour cooked together under constant supervision and stirring.  A roux can be dark, medium or blonde, depending on how long the roux is cooked.  This dish calls for a medium roux, which means it will have been cooked about five to seven minutes until taking on slightly browned color.

The Recipe
Melt the butter over medium high heat in a large skillet.  Saute the onions until they begin to caramelize, about five minutes.  Then add the flour.  Stir constantly for 5-7 minutes until the roux has browned.

Add the chicken stock and the heavy cream a little at a time, stirring constantly until a thickened, gravy is created.  Stir in all the remaining ingredients except the lemon juice and heat the shrimp through.

Add the lemon juice at the last minute, stir well, and then spoon the shrimp and gravy over halved, hot, buttered cheddar biscuits.