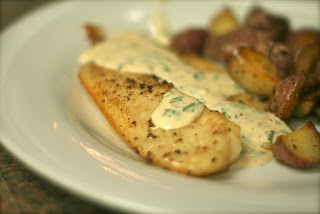 Some time back, I posted a recipe Pan Fried Tilapia with Caper Butter.  I’ve made it many times, but on this occasion, I wanted something a little spicier and ran across a recipe on the Food Network website from the most jiggling cook on television, Giada De Laurentiis.  She broiled her fish, however, and I think my pan frying technique with soy flour was a better way to go.  It certainly added to the sauce, which is made à la minute after the fish has been fried. Giada also used honey; since I limit refined carbs and sugars from my diet (and honey is a simple sugar), I used 1/2 packet of Splenda.  This dish went very well with some Basmati rice that had been prepared with some finely diced red bell pepper and parsley.

The Recipe
Season the flour with the paprika, salt, garlic powder, pepper, onion powder, cayenne pepper, oregano and thyme.  Stir it well in a dry mixing bowl to ensure even incorporation of the seasonings.  Your fish fillets need to be a little damp, but not wringing wet.

Put the flour mixture on a paper plate and press the fish one side at a time into the mixture, ensuring each part of the fillet is evenly coated.  Allow the fish to rest a minute on another paper plate, but do not stack them.

Place ½ stick butter and the peanut oil in a cast iron skillet and heat to the smoking point. Place the fish fillets into the oil. Cook until browned 4-5 minutes, carefully turn, and cook another 3-4 minutes. Remove to paper towels while you finish the sauce.

De-glaze the pan with the lemon juice, scraping up all the browned bits, and then add the cream and mustard.  Test for seasoning with salt and pepper and add a bit of Splenda to sweeten the sauce a little to your liking.  Bring the sauce to a boil and reduce the sauce slightly until it coats the back of a spoon, stirring constantly.  Finish with the chives.  Serve on top of the fish fillets or on the side as you prefer.