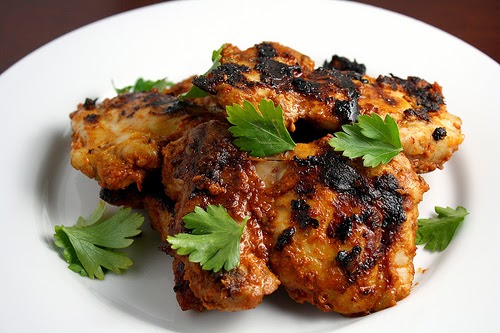 I find it interesting how grocery stores catch up to the public’s ever changing cooking trends and appetites.  Prior to the the fat-free craze that came out in the early 1980’s, boneless, skinless chicken breasts were rarely seen.  But soon thereafter, all supermarkets stocked them in their meat departments’ display cases, and consumers would pay through the nose to have the very things that give a chicken breast any flavor at all cut away and removed.  For years, we managed recipes with boneless, skinless chicken breasts and did all we could to keep them from tasting like a dry piece of chewy cardboard.  Slowly cooking them in a variety of sauces and other ingredients was about the only way to enjoy these tasteless pieces of fowl, unless you batter dipped and deep fried them, which sort of defeated the purpose of removing the skin and bones in the first place.

Today, things are different.  It’s not about fat-free anymore.  It’s about balance. Fat is not a bad thing we have learned, and in fact, we need a certain amount of it to digest and assimilate protein.  Someone, somewhere found a way to mass produce boneless, skinless chicken thighs, and the culinary world went to new heights.  Dark meat on any fowl is where the fat, and hence where the flavor resides. Removing the skin from a thigh doesn’t impact the flavor much, and slightly reduces the caloric influence.  Now, it seems, the boneless, skinless chicken thigh is more readily available in the grocery meat department and recipes for them are popping up everywhere.

I found this recipe while searching the internet (with apologies for not making note of the original author) looking for something to do with a package we had picked up at the grocery store.  Truth is, you don’t have to do much with a chicken thigh to make it taste better than it already does, completely the opposite of its white meat, upper body cousin.  But I was taken with this recipe, which I heavily modified based on the ingredients I had on hand.

I used a store-bought salad dressing called, Naturally Fresh Ginger Dressing.  If you don’t have or can’t find this product, use store-bought minced ginger, or buy a fresh ginger root, grate it, and combine with a 50/50 mix of vinegar and water.

As for the heat, you can use a variety of products.  I happen to have on hand some Kikkoman Thai Style Chili Sauce, but a shot or two of Sriracha Sauce or even Tabasco Sauce would work just fine.

I married the Asian flavors of the marinade with a crunchy peanut Cole Slaw recipe.  The two recipes together were a perfect match! You can buy a head of cabbage and go to the trouble of shredding it yourself, but I find it easier just to buy the store-bought bag of pre-made Cole Slaw mix, which generally has a couple of different kinds of cabbage and some shredded carrots.  That’s another example of how grocery stores are catering to our fast-paced, time-robbed lifestyles by taking the labor out of food preparation.

Then, prepare the slaw:
Whisk all of the dressing ingredients together.  Pulse chop the peanuts in a food processor until coarsely chopped. Chop the green onions.  Combine the slaw, green onions and cilantro, but do not add the peanuts or the dressing until just ready to serve.  This will ensure everything stays crisp and crunchy. When ready, just  add the the peanuts and dressing to the greens, and toss well to combine.

Finally, roast the chicken:
Preheat oven to 425 degrees.  Remove the chicken from the marinade, and shake off any excess liquid.  Then, lay out the chicken pieces in a single layer on an oiled baking sheet or roasting pan.  Discard the marinade. Bake 40-50 minutes, turning the chicken over half way through the cooking time.  When the chicken is done, turn on the broiler.  Broil the chicken about six inches from the heat source until the chicken is bubbly and slightly crisp.  Even a little char will be okay and add flavor to the dish.  Turn the pieces over and repeat.  Serve hot along with some rice, and a side of the cold, crispy slaw.