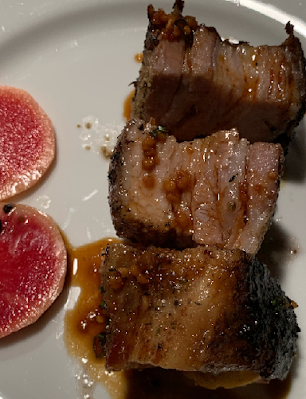 Normally and with maybe two or three exceptions, I don’t post a recipe until I’ve perfected it.  In some cases, like this one, I’ll post it more or less as I prepared it, but with a couple of modifications I would make the next time around.  I’ll edit the recipe again if the results are better.  This is only my second venture into preparing pork belly, which has become something of a culinary sensation the past few years.  Now that we have a local grocer regularly carrying it, I’m inclined to want to experiment with what essentially is un-smoked, un-cured, un-sliced bacon. My first try at a pork belly entree can be found here. This latest attempt was prepared as an appetizer for Christmas Eve Dinner.  It was good, but not great.  I feel like the potential was there, however, so I’ll post this recipe for now and keep trying for culinary perfection.

In this case, I purchased a one-and-a-half pound pork belly, sold with the skin off.  I’m learning that preparing pork belly with the skin on is a different ballgame than if the butcher has removed the skin, which is the case in these parts.  I asked the butcher about this, and he said that most people don’t know how to prepare a pork belly with the skin on, and if not done properly, it can just wind up being a tough, chewy experience that ruins the whole dish.  That’s a shame because based on everything I’ve read, if done properly, the crispy skin can be a sublime experience.  Think Peking Duck, and you’ll have an idea of what I’m talking about.  Still, pork belly without the skin can be pretty darn good.

At the last minute when I served this dish, I decided to use some store-bought Gruyere cheese puffs, sliced in half, as underliners for each piece of pork belly I served.  It acted as a means to stabilize the pork belly on the plate and to absorb some of the sauce.  It’s not entirely necessary and admittedly, Gruyere cheese puffs might be hard to come by.  I think the next time around, I will simply try a baguette of French bread, sliced into medallions and lightly toasted with olive oil, but the principle will be the same.  I’ve written the recipe below as such.

Finally, a word about watermelon radishes.  These are also understandably scarce, in part, because they’re not high demand produce and also because they take much longer than most root vegetables to mature, better than two months.  They are not therefore a particularly profitable crop to grow.  If you can find them, great.  They are a very mild flavored member of the daikon family, which includes arugula and turnips.  If you cannot find them, then a small arugula salad with a mild vinaigrette would suffice, or you could thinly slice turnips and pickle them per the recipe below.  I would not suggest, however, substituting regular grocery store radishes, which would simply overpower the whole dish. The idea here is that you want something as a pallet cleanser between bites of the very rich pork belly; anything with a light, bright crunch and mild flavor would work here.

The Recipe
Use a spice grinder to pulverize the fennel and coriander seeds if you need to. Whisk together the 3 tbsp of olive oil, salt, fennel, thyme, garlic, coriander seed and black pepper.  Slather this all over the pork belly, then place it in the refrigerator, uncovered, for at least six hours.

In the meantime, mix the pickling solution in a container, and submerge the radish slices.  Allow to sit in your refrigerator for six hours.

Place the pork belly in a baking dish, fat side up, and pour the ale all around it and just up to the fat cap, but not covering it.  Use aluminum foil to seal the baking dish and place in a preheated 325 degree oven for two hours.

Whisk together all the ingredients for the sauce and allow to sit at room temperature for two hours.

When the pork belly has braised for two hours, remove it from the liquid and pat dry.  Place under a broiler for a minute or two until the top fat cap bubbles and crisps up a bit.  Place the baguette slices, slathered with olive oil, under the broiler for 20-30 seconds until they begin to brown.

Add two tablespoons of the braising liquid to your sauce mixture, and whisk well to combine.

To serve the dish, cut the pork belly into small, cube-like pieces, figuring three to four pieces per person.

Garnish with 2-3 slices of the pickled watermelon radishes.