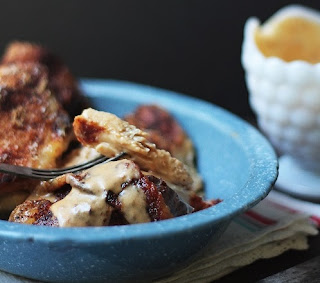 You will need a cast iron skillet for this dish.  It’s inspiration came from the classic recipe, Chicken Paprikash, which is a method of browning and then stewing chicken with onions in a savory paprika sour cream sauce.  My version yields a very tender, crispy chicken with the savory sour cream gravy made after the fact and served along side or spooned over.

Toss the four chicken pieces in a mixing bowl with the olive oil, paprika, onion powder, salt and pepper, and thoroughly coat each piece of chicken.

Get a cast iron skillet screeching hot, and then lay the chicken thighs skin side down in the pan.  Let them cook for 2-3 minutes, then turn them over and cook another 2-3 minutes.  They should have a dark, mahogany color.

Put the cast iron skillet in the 400 degree oven and cook the chicken pieces for 25-30 minutes until done.

When time is up, remove the skillet from the oven and take the thighs out to a warm platter.  Cover and let them sit while you make the gravy.

Over medium high heat, toss in the butter and when melted, add the shallots.  Cook for a couple of minutes until the shallots are limp.

Add the white wine and using your spatula, scrape up all of the crusty bits from the bottom of the skillet.  Add the cream and simmer until the cream is reduced by about a third and the sauce has thickened.

Remove from the heat and stir in the sour cream until well blended.  Add the parsley and check for seasoning.

Serve the chicken thighs with the gravy on the side or spooned over.