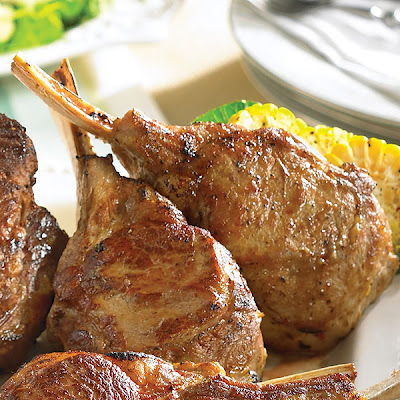 This is a 2021 update to a recipe first posted in 2009 on almost the same date in April.  As I am critical of food bloggers these days unduly complicating recipes to make more work for less value, I must take the same criticism that this was one recipe in which I had done exactly that.  I’ve made this dish many times over the last decade but have substantially modified it, so much so that last night, I realized I needed to update this post. I first created this recipe twelve years ago after buying some veal rib chops and then not being entirely sure what to do with them. I also had some fresh shiitake mushrooms and had a vague notion of grilling but as I recall, the weather turned bad and I wasn’t going to be able to put the chops on the grill that evening.

So, after rummaging through my pantry and throwing some things together, I made up this whole recipe as I went along. That is possibly one of the finest feelings in the culinary arts, not knowing exactly where one’s inspiration is coming from but simply going with the flow. When it works and the dish comes out with quality like this, it’s a wonderful thing.

The Recipe
Take the rib chops out of the refrigerator one hour before cooking.

Mix all the herb rub ingredients together in a mixing bowl with a whisk until evenly incorporated. Take a small amount of olive oil and rub it into each side of both chops; then press each chop into the herbs so that they are evenly coated on all sides. Reserve two tablespoons of the remaining herb rub. Let the chops rest for 10-15 minutes before cooking to let the seasonings soak into the meat. Do not set the chops on top of one another.

Pull the stems out of the shiitake mushrooms and discard them. Clean and slice each mushroom cap into thin strips.

Heat half the olive oil in a sauce pan over medium high heat, then toss in the shallots.  Sauté for a couple of minutes until they become limp and begin to pick up a little color.  Toss in the mushrooms.  Sauté them for about ten minutes; add the minced garlic and cook another couple of minutes.  Add the butter and when melted, sprinkle the two tablespoons of reserved herb rub in the pan and stir to combine.

Reserve a quarter cup of the red wine and set aside. Mix the rest of the red wine, the port, sherry, beef stock and the beef bouillon concentrate in the sauce pan with the mushroom mixture; bring to a simmer and reduce by half. Then, lower the heat and keep the sauce on a slow simmer while you cook the chops.

Heat a cast iron skillet with the remaining olive oil on medium high heat until shimmering, then sear the chops two minutes on each side. Put the skillet in the pre-heated oven and continue cooking them for 10 minutes.

Remove the chops from the oven, take them out of the cast iron skillet and cover with aluminum foil for ten minutes while you finish the sauce and turn it into gravy.

De-glaze the skillet with the reserved 1/4 cup of red wine, scraping up all of the roasted brown bits and add this to the saucepan with the gravy.  Bring the gravy back to a boil, and add the lemon juice and the balsamic vinegar. While the sauce is simmering, add a little bit of the slurry at a time until the sauce thickens and coats the back of a spoon. Allow the gravy to simmer for at least one minute after you introduce the slurry.

Spoon the sauce and plenty of the mushrooms over the chops before serving and perhaps over some boiled and smashed red potatoes, too.