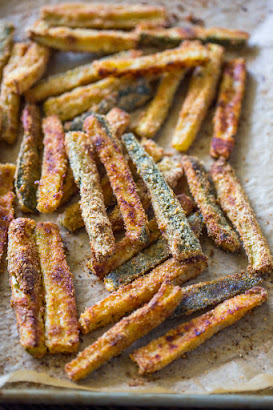 Zucchini is a summertime squash, allegedly, but I’ve never seen a season in our grocery store when they were not carried in inventory.  Zucchini is considered part of the squash family, which by the way also includes its cousins of cucumbers and melons. They’re durable vegetables and last a long while under refrigeration, but the best part is that you don’t have to peel them! In fact, they’re tastier if you don’t.

This is low carb and keto-friendly version, using the classic low-carb “flour” of half-parts pulverized pork rinds and grated Parmesan cheese.  But you could change things up by adding or substituting almond flour, soy flour or if you don’t mind the carbs, Panko bread crumbs.  The basic recipe and technique would be the same regardless.

The Recipe
Pre-heat your oven to 425 degrees and make sure a rack is in the top slot.

Line a sheetpan or large cookie sheet with aluminum foil for a much easier time cleaning up, and spray liberally with the non-stick cooking spray.

Pulverize the pork rinds in a food processor (you’ll use about half of a large bag); add the Parmesan cheese and spices, then pulse the mixture several times to ensure everything is well blended.  Remove the “breading” to a large bowl.

Leave the zucchini peels on.  Cut each in half lengthwise.  Keep doing this until you have zucchini sticks about 1/8 inch thick.  Then cut the sticks in half so you have, more or less, three-inch long sticks.  Allow the zucchini sticks to sit out on your kitchen counter for an hour, particularly if they just came out of the refrigerator.

Blend the two eggs together well with a whisk.  Then dredge each stick in the egg, followed by coating them liberally in the “breading” mixture.  Lay out each stick in even rows on your sheetpan or cookie sheet, which will make turning them over with a spatula much easier.

Allow the prepared zucchini sticks to rest for about 15 minutes before you pop them in the oven.

Bake the zucchini on the top rack in your oven at 425 degrees for 13 minutes; pull them out and flip them over, then cook another 13 minutes.

Make the Horsey Sauce while the zucchini is cooking.  Just mix the four ingredients and blend well.

When you remove the zucchini sticks from the oven, dust them with the course-ground sea salt.  Allow them to cool to the touch before serving along side liberal portions of the Horsey Sauce.