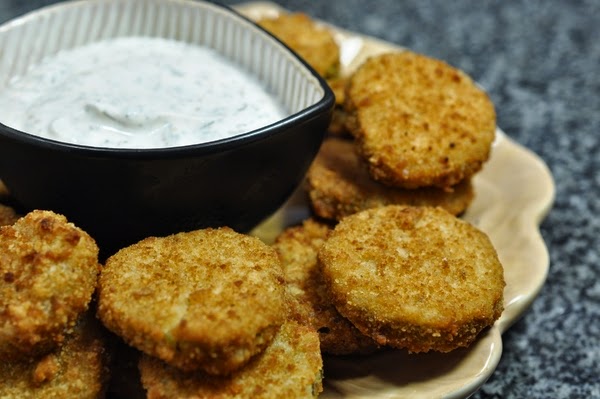 The first time I ever had or even heard of fried dill pickles, it was the mid-1980’s and I was in Memphis, Tennessee at a restaurant called Folk’s Folly which last I heard is still in business.  They served complimentary baskets of fried dill pickles in their bar while you waited to be seated in what was a very popular, very busy restaurant.  Fried Dill Pickles?!  It sounded strange and new and somewhat off-putting.  But one bite and I was hooked.  I’d order two, if not three baskets ever time I dined there.

Fast forward to the new millennium and all of a sudden, fried dill pickles are popping up everywhere as a bar food or appetizer at casual restaurants.  The problem, of course, is that you’re taking a food that essentially has zero calories, then laden it with high fat caloric goodness, exacerbated by the usual accompaniment of a sour cream or mayonnaise- based dipping sauce.

I came across this recipe ages ago and held on to it until I was motivated to go through a lengthy prep process.  Such motivation came about on Super Bowl weekend when I wanted something salty, fried and to be eaten with one’s fingers.  I think I found the recipe on Pinterest, but the recipe was originally on a website called Mary’s Bites and landed up as an adapted recipe on skinnytaste.com.  Whoever came up with this recipe, I found it required a considerable amount of adjusting, and this is the version I’ve made. But I give credit to the trailblazers for thinking of a less caloric way to deliver the deep-fried goodness of a fried dill pickle.  The original dipping sauce had buttermilk in it and I adjusted this yogurt based dipping sauce to have less fat and calories.  You can use fat free yogurt, fat free sour cream and fat free mayonnaise if you want.  I did not as I find fat free foods generally are very high in sugar content which I prefer to leave out of my diet.

The Recipe
Blend together all of the ingredients for the dipping sauce and set in the refrigerator for at least thirty minutes while you prepare the rest of the dish.

Drain the pickles through a colander, then lay out the pickles on paper towels to drain.  Mop up any liquid that clings to the pickles.  You want the surface of each pickle as dry as possible.

Put a sheet pan or cookie sheet into the oven and preheat to 450 degrees.

Whisk the egg and egg white together until well blended.

Mix all of the remaining dry ingredients together except the course ground sea salt, and use a clean, dry whisk to ensure everything is evenly distributed.

Dip each pickle into the egg mixture, then press the chip down into the dry mixture to ensure each are evenly coated on each side.  I suggest you lay out paper towels and put a baking cooling rack on top, and use this as a place to let your pickles rest until you’ve prepared them all.

Bake the pickles 15 minutes, remove from the oven and turn them over, then bake for another five to ten minutes until they are golden brown.

When they come out of the oven, hit them with some course ground sea salt, and serve hot with the dipping sauce on the side.