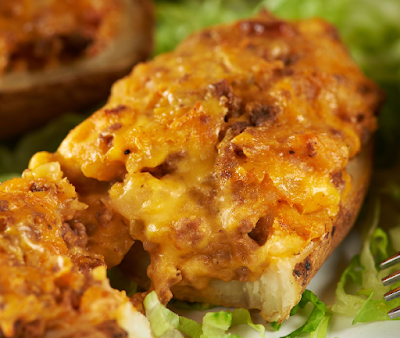 There are no boundaries to the imagination of ingredients that might be used to stuff a baked potato, but generally, we seem locked into butter, sour cream, cheddar cheese, bacon and chives.  Not that there is anything wrong with that, because those are the condiments generally provided in a steakhouse when the titular entree is accompanied by the ubiquitous baked potato. To jazz things up, a couple of restaurants in the 1970s, including the original TGIFriday’s in Manhattan, created deep-fried baked potato skins served with, again, cheddar, bacon and sour cream and sometime thereafter, the twice-baked potato arrived on the culinary scene.  The twice-baked really took off in the ’80s when Ore-Ida mass produced a frozen, microwaveable version of the dish.

In my mind, the twice-baked potato was more a menu marketing ploy than it was a new culinary creation.  A potato is baked; the meat of the potato is removed leaving the jacket intact; the potato meat is essentially mashed with – you guessed it – sour cream, cheddar, bacon and chives, then piped back into the jacket and baked again. So, really what you have is a baked potato prepared with the usual condiments that was sold for a lot more than just a baked potato with the condiments served on the side.

Somewhere along the line, people started piling things on top of a baked potato to make it more or less a one-dish meal.  This is where we seem able to get beyond the butter, sour cream, et al and utilize more substantial ingredients that turn the lowly potato from a side dish to the main course.  Scour the Internet for recipes and you’ll see every imaginable topping, from chili and barbecued brisket to shrimp creole and even, bacon and eggs.

Inspired by My Number One Fan and a recipe from the hungrycouple.com website (which is largely sponsored by Maille food products), I adapted their recipe to suit my tastes and cooking style, and this is what I came up with.  I was hesitant to post this recipe because I feel it needs tweaking.  I’m just not sure what with, yet, so I’m content to publish it for now, if only to return to it after a more creative cooking session later when the mood strikes me.

Incidentally, a lot of recipes along these lines get really fussy about whether you should bake your potato in foil or au naturel. I mean, some bloggers are downright catty about it. Here’s my take: it doesn’t really matter.  I think the only reason to bake a potato in foil is so you can slather it in butter first, along with some seasonings like onion and garlic powder, and allow the potato to absorb the butter while it’s cooking.  Whatever isn’t absorbed becomes beautifully browned which only has a happy place when poured inside the potato after the jacket is cut open.  If you don’t want to go to the effort, that’s up to you.  My Number One Fan actually uses this method:

Lay out a sheet of aluminum foil.  Spray the jacket of a very large Russet potato with butter flavored Pam.  Put three pats of butter on the bottom of the potato and three on top.  Sprinkle liberally with salt, black pepper, Mrs. Dash Garlic & Herb, Mrs. Dash Onion & Herb, and Mrs. Dash Table Blend, about three shakes of each.  Double wrap the potato in foil and bake in a dish at 375 degrees for 90 minutes.

Then, after you slice the potato open, pour the brown butter inside it, and top it with this:

The Recipe
In a skillet over medium high heat, warm the olive oil and then crumble in the ground beef. Stir frequently until the beef is thoroughly crumbled and all the pink is gone. Drain any excess oil from the meat and set aside on a platter.

Add half the butter to the skillet and sauté the onions.  Cook on medium heat until the onions begin to caramelize, about ten minutes.  Add the garlic and sauté for another minute.  Remove the onions and garlic to the platter.

Melt the remaining 3 tablespoons of butter and then add the flour to the skillet, stirring constantly until a roux has formed and cook until it becomes a golden brown, about four minutes.

Add the beef stock, half and half, Worcestershire Sauce, mustard and season with salt and pepper.  Stir constantly over medium high heat while the roux works its way into the liquid and the sauce becomes smooth and creamy.  Add the cheddar cheese and stirring constantly, allow the cheese to melt into the sauce.

Rejoin the ground beef and onions with the sauce, add the parsley, and stir well to combine.

Liberally top your hot, buttered baked potato with the sauce and serve along side sliced tomatoes.