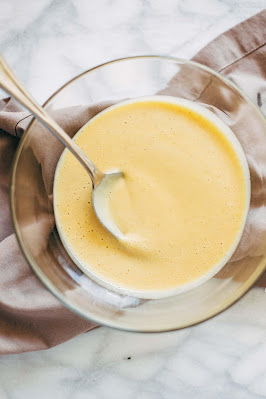 I was a food and beverage director in the early 1980s for a swank hotel in Atlanta that had five restaurants, three bars and 60,000 square feet of banquet space.  We had eight kitchens including our own butcher shop and pastry shop.  I learned a great deal about the art of creative cooking in those years.

One of our restaurants was quite popular; a white table cloth, fine-dining concept with a Continental-French theme.  We had hired an up-and-coming culinarian as Chef d’Cuisine, who invented an appetizer one night as an off-menu special that actually went on to define the restaurant, and took the city’s upscale dining community by storm.  Soon, it was appearing on the menus of all our competition.  Today, it sounds almost mundane.  But in 1984, this was culinary cutting edge: Panko Crusted Deep Fried Fresh Maine Lobster Tails with a Honey Mustard Dipping Sauce.

At that time, no one had ever thought to deep fry lobster tails that had been dredged in egg wash and coated with Panko crumbs.  The idea of eating these with your fingers and dipping them in honey mustard sauce was considered very avant garde, and in fact, few people had ever heard of honey mustard sauce before then.  Honey mustard was allegedly created commercially by a Chick-fil-A franchisee in Fredericksburg, Virginia around this time, so its likely that it was becoming regionally known and perhaps that’s how our chef in Atlanta learned about it. Today, of course, Honey Mustard dressing is as ubiquitous as Blue Cheese, Ranch and Thousand Island dressing.

I found many recipes on the Internet, so as usual, I took the best ideas from several and made this amalgamation.  However, I’ll give credit mostly to a website called anediblemosaic.com for the bones of this creation.

The Recipe
Using only three packets of the Splenda, place all ingredients except the olive oil in a mixing bowl and use a whisk to combine all ingredients well. Then add the oil, constantly whisking, until the dressing is well blended and homogeneous.

Then, taste it.  You may or may not want more Splenda, depending on your sweetness preference.  In this case, my Number One Fan wanted just a smidgen of a fourth packet.

Refrigerate for an hour before using.