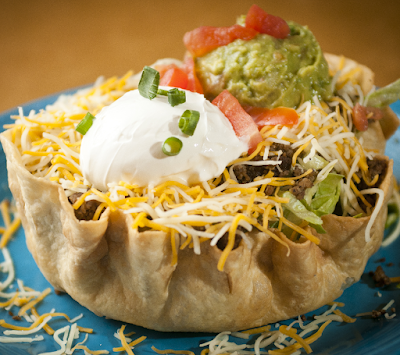 There’s about a billion ways to make a Taco Salad. They were purportedly first served as “Ta-Cups” at Disneyland in Anaheim, California in 1955, created by the original inventor of Fritos Corn Chips, Elmer Doolin. That’s at least the official version of the story from a 2013 book, Taco USA: How Mexican Food Conquered America. Essentially, the Ta-Cup was a “Ta-Co”, without the taco shell, per se, but instead, served in a taco cup, and, as you might expect, the cup was made entirely of Fritos.  The contents were nothing more than that which was customarily served in a taco: seasoned ground beef or chicken, lettuce, tomato, shredded cheese and a dollop of sour cream and/or guacamole.

Today, of course, the dish has morphed into countless variations on the same theme.  While the original Frito bowl didn’t take-off, the practice of frying a corn or flour tortilla into a bowl shape became commonplace in the 1970s and 80s. Today, of course, all kinds of ingredients have been added, like fried corn, black beans, green olives, and even shrimp. Kobe beef, lobster, beluga caviar and black-truffle Brie cheese are ingredients found in the world’s most expensive Taco Salad – $25,000 – served at the Grand Velas Los Cabos in Cabo San Luca.  So much for its humble beginnings.

No matter what you put in your taco salad, the first thing you need is the taco seasoning.  I became discouraged from using any of the packaged taco seasonings; they all carry a lot of things that are not, well, seasoning. Old El Paso, Durkee, Ortega, McCormick – all of the giant food packagers have their versions, but they all to varying degrees contain things like maltodextrin, hydrogenated soybean oil, silicon dioxide, corn starch, sugar, enriched flour, and the like.  None of these things add flavor, some add to the carb count and most were designed to extend the product’s shelf life or to keep the ingredients from clumping. Just, ugh.

Regardless of what you put in your taco salad and with credit to the Pioneer Woman website and my Number One Fan with her modifications, here is the basic formula for making the famous taco seasoning without all the other chemicals or fillers.

This will fill an 8-ounce jar about 3/4 full and would be the equivalent of six commercial packets.  To make traditional taco meat, use about 2 tablespoons of this spice mixture to 1 pound of ground meat that has been sauteed until the pink is gone and all grease poured off, with 3/4 cup of water.  Simmer until most of the liquid has evaporated, about ten minutes.

For the record, I usually make homemade guacamole with taco salads, the recipe of which is found here.
In addition, I like shredded lettuce, diced tomatoes or Newman’s Salsa,
sliced green olives, chopped green onions, pickled jalapeno slices, shredded cheddar
or Mexican blend cheese and sour cream.  Leave out the taco shell bowl
and this becomes a great low carb dinner.