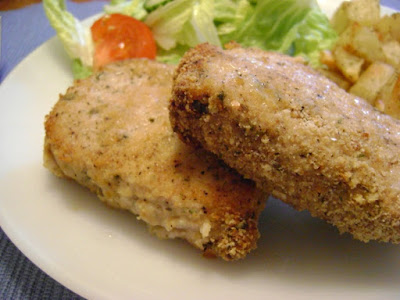 The idea of Shake ‘n Bake for its time was revolutionary: throw pork chops in a bag, which was provided, with a packet of seasoned breading, and cook it in the oven.  No frying.  People had never heard of such a thing, and the advertising was ear catching: “It’s Shake ‘n Bake – and I helped,” became part of the modern day lexicon. 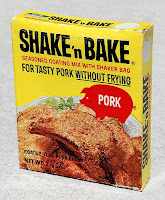 The packaging has changed over the years, and so has the recipe for the breading, but not so much that it doesn’t still contain ingredients that are an assault to a healthy low carb diet, like enriched wheat flour, hydrogenated soybean and cottonseed oil, dextrose, annato and yeast.

Don’t get me wrong.  I loved this stuff.  As a kid.  As an adult.  My pantry has almost never been without a stock of Shake ‘n Bake for pork chops.  Strangely, I never really cared for the same product meant for chicken.  I suppose that’s because Fried Chicken is everywhere: KFC, Church’s, Popeye’s and a thousand other regional and one-of-a-kind Fried Chicken joints populate the US highways and byways with greater frequency than gas stations. 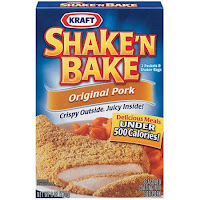 But not pork chops.  There are no Fried Pork Chop joints anywhere that I know of.  That’s not to say Fried Pork Chops are not commercially available at various Southern-style or “soul food” restaurants, mostly in the deep South states of Georgia, Alabama and Mississippi.

I recall being in Albany, Georgia on a consulting job one time, and there were Fried Chicken places everywhere – almost on every corner and represented by every national Fried Chicken brand, many regional brands and solo Fried Chicken joints – so many, in fact, that I could smell chicken frying anywhere in the city just by rolling down the window of my car. 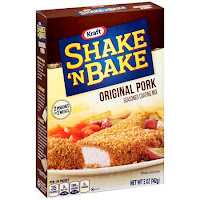 Perhaps, its because it might not be considered socially acceptable to pick up a pork chop and eat it with your hands, like Fried Chicken.  Perhaps, its because the idea of specializing in a fast food pork chop has a lack of consumer acceptance in a field dominated by beef and poultry.  Or perhaps, it’s just because no one has thought of it yet.

At any rate, some years ago, I experimented with a low carb version of Shake ‘n Bake that I could make from scratch and this laid around in a notebook until I pried it loose a couple of days ago.  My Number One Fan gave thumbs up and said she thought this recipe might even be better than the original.  That’s was endorsement enough for me.

By the way, do not reuse any of the mixture if left over after coming in contact with the raw pork chop.  If you do make extra that is unused, store in the refrigerator because of the Parmesan cheese.  It’ll keep several weeks.

The Recipe
Preheat your oven to 400 degrees.

In a food processor, granulate the pork rinds to a fine powder, a couple of minutes.  Add the Parmesan cheese and all the seasonings and mix well in the food processor.  Put all the ingredients into a plastic zip lock bag.

Spray a baking dish liberally with the non-stick cooking spray.

Shake each pork chop individually in the plastic bag with the seasonings, being sure they are thoroughly and evenly coated, then lay out in the baking dish.