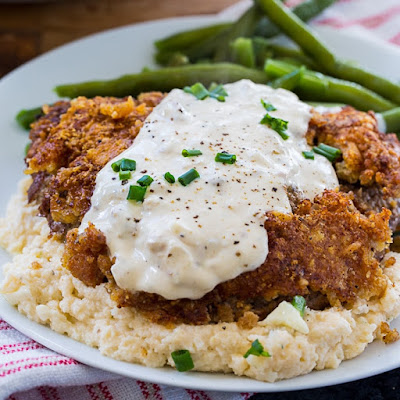 There are dozens of low carb or Keto versions of the classic chicken fried steak recipe on the Internet and it seems as though a lot of them feel like they need to explain that chicken fried steak doesn’t have any chicken in it.  That may be beneficial information for a bunch of Yankees who still live in the rust belt, but pretty much everyone else in the country knows that chicken fried steak is beef.  Specifically, it is made with sliced top round or top sirloin of beef that has been run through a butcher’s tenderizer, packaged and sold generally as “cubed steak” or “minute steak.”

The term “chicken fried’ simply means that the beef has been treated like southern fried chicken was treated before Harland Sanders got hold of it.  Chicken pieces are dipped in a combination of eggs and milk or cream, dredged and coated in seasoned flour, then fried in oil or shortening in a cast iron skillet.  This version of that recipe does exactly the same thing with cube steaks, except low carb alternatives to flour are used in both the dredge and as a thickening agent for the gravy.

Let me say at the onset, I was dubious about the basis for my recipe that came from the Stay Snatched website.  For starters, the name of the website was highly suspect in my mind.  Secondly, the author of the site was exceptionally verbose while omitting various important pieces of information, like draining the skillet of any excess oil before making the gravy.  And finally, the gravy recipe itself called for xanthan gum as a thickener.  That’s one of those things I’ve read from a list of ingredients that also has stuff like phosphoric acid, hydrolyzed soy protein, propylene glycol alginate, and potassium sorbate. That just doesn’t sound like good company.  But I found out that xanthan gun is created when sugar is fermented by a type of bacteria called Xanthomonas campestris.
When sugar is fermented, it creates a broth which is made solid by adding alcohol. It is then dried and turned
into a powder. It’s quite easy to work with and does every bit as good a job as does flour at about one-eighth the ratio, so long as you remember two rules, which I will share in the recipe below.

In the end, the author was spot-on with the chicken fried steak recipe but slightly off the mark on the gravy, so as usual, I made adjustments. My results won the accolades of My Number One Fan, who is Southern and bona fide bonkers for chicken fried steak with cream gravy, but was staying true to her austere Atkins Induction Diet.

By the way, I found more than a few recipes on the Internet for using sausage gravy with chicken fried steak.  Having grown up in Texas and lived all through the South, I’ve never seen sausage gravy served with chicken fried steak.  Sausage gravy is meant to be served with biscuits for breakfast.  That said, I did find that using bacon flavored salt added the right dimension of flavor to this gravy recipe.  Having been given a jar of bacon flavored salt seven or eight years ago, I’m glad I found an actual recipe in which to use it. The JD brand of Bacon Salt is fairly popular and easily found for sale on the Internet.

Have this recipe with my mock mashed potatoes, the recipe for which can be found here, but omit the garlic, and you’ve got something pretty close to a luncheon Blue Plate Special at the local diner, but with just a handful of carbohydrates from the original version.

The Recipe
Combine the almond flour with the Parmesan cheese in a large mixing bowl, and thoroughly blend in the three spices. In a separate mixing bowl, whisk the eggs and cream together until homogeneous.

Dredge each steak in the flour, then coat well with the egg and cream mixture, then dredge again in the flour until both sides of the cutlet are thoroughly coated.

Allow the coated cutlets to rest uncovered in the refrigerator for thirty minutes.  This will help dry them out a little, and give you a little insurance the breading will stay affixed to the steak while cooking.

The author of the original recipe claims that avocado oil and butter is a better combination than with olive oil.  Avocado oil has a much higher smoke point, in fact among the highest of all cooking oils, and she claims that this was better at keeping the breading intact when you flip the cube steaks.  But avocado oil is much more expensive on an ounce for ounce basis, so I used olive oil.  I had only one small problem in flipping one steak, but I think it was because I didn’t let it cook long enough.  I may further experiment with this and try avocado oil the next time.  My sense is that avocado oil per se is not what made her breading stay intact, but cooking at a higher temperature might be the real reason.

Nevertheless, heat the oil and butter in a cast iron skillet over medium high heat until the oil is shimmering.  Test it with a bit of the almond flour mixture, and if the oil sizzles immediately, it’s ready.

In two batches, cook the cutlets in the hot oil for three minutes on each side.  Try to keep the temperature of the oil as consistent as possible, knowing that the oil will cool down slightly when the steaks are first placed in the skillet, and further, when they are flipped over.

Keep the cutlets warm on a platter in a 250 degree oven while you make the gravy.

Drain off all but a tablespoon of the oil and over medium heat, add the heavy cream, the bacon flavored salt, pepper and the Kitchen Bouquet. Be sure to scrape up all the crusty bits left behind after frying the cutlets. Bring the cream to a simmer.

Here’s Rule #1 in working with xanthan gum: in a small cup or ramekin, place a teaspoon of the hot cream in with the xanthan gum while stirring constantly.  Add two more teaspoons one at a time and keep stirring.  This is tempering the xanthan gum like you would egg yolks, which is critical to the process of ensuring the xanthan gum amalgamates and doesn’t clump on you.

Add the xanthan gum and cream mixture to the skillet and continuously whisk as you bring the cream back to a simmer.  Allow the gravy to bubble away for at least a minute, whisking all the while. That’s Rule #2. You will notice the gravy becomes thicker the longer it simmers.  Before removing from the heat, test the gravy for seasonings and add additional salt or pepper as necessary.

Place one or two cutlets on a dinner plate, top with generous spoonfuls of the gravy and serve.