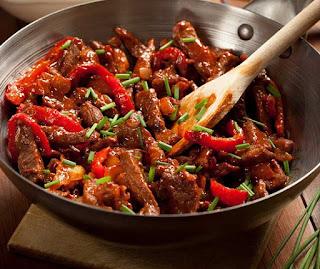 You can easily carb this up by serving it over rice, but on its own, this is a pretty delicious and healthful dish.  Truth be told, my Number One Fan had several “Reduced For Quick Sale” cuts of beef in the freezer, which was very frugal of her, but she had no plan to prepare them.  Enter The Kitchen Tapestry Chef with just throwing some stuff together in a wok on a weeknight.  This is not a hard and fast recipe.  You can do any number of things to change the texture and flavor of the dish.  Add some Sriracha Sauce for an added zing.  Add mushrooms, bean sprouts, broccoli or asparagus.  You can add more or less soy sauce, or substitute teriyaki sauce.  Play around with it, have fun and eat well!

The Recipe
Marinate the beef in the Newman’s Dressing, the minced garlic and the sesame oil for thirty minutes while you prepare all of the other vegetables.  You want everything ready to toss into a screaming hot wok, and have all your ingredients lined up in the order you need them.  The idea with a stir fry is to, well, stir continuously while you’re frying everything in a wok over high heat.  You don’t have time to take your eye off the ball or things can get dicey in a hurry.

Heat your oil to a point it is shimmering, then toss in the green and red bell pepper.  Chow the peppers until they start to soften and take on some color, about three minutes.

Toss in the beef and chow until all the redness is gone, about three minutes.  Add the zucchini and fry for another two minutes.Toss in the green onions for another minute or so.

Toss in the tomatoes, soy sauce, ginger and powered mustard and chow for another minute or so until the tomatoes just start to collapse, but you want them still fairly firm.

Add the beef stock and then toss in your spinach and cilantro.  Chow until the spinach collapses and some of the liquid has evaporated.

Throw on the chives and sesame seeds at the last minute before serving.