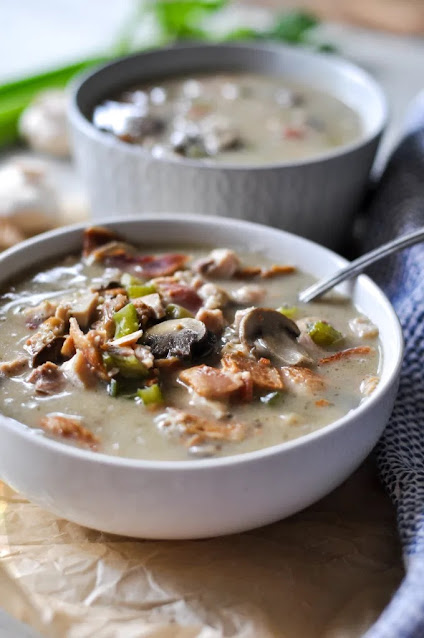 In the strictest interpretation of culinary terms, a chowder is a classification of soup that contains large chunks of protein and vegetables in a cream-based broth.  In the northeast, hearty seafood and clam chowders with diced potatoes are common.  In the southwest, chowders are made with choirzo, chicken and very often, corn instead of potatoes.  The required commonality of most chowders is the cream-based broth typically thickened with a roux.  The one notable exception is Manhattan Chowder which breaks from culinary tradition by using a tomato based broth.  But that’s New York for you.  How is a chowder different from a stew?  Stews rarely have cream in them, and the ratio of solid food to liquid is higher.  Is chowder a soup?  Yes.  All chowders are soups, but not all soups are chowders.

Confused?  To be sure, things become much more ambiguous in terms of a chowder classification when you decide to go low-carb with your ingredients.  To some, a chowder must contain potatoes or corn, both of which are contrary to a low-glycemic lifestyle.  And in point of fact, even if you conduct an Internet search for low-carb chowder, you’ll still get an awful lot of recipes that contain one or both of those those ingredients.  So, it is with a tip of the hat to the peaceloveandlowcarb website that gave me the inspiration for this Crock Pot recipe, which is the perfect cooking medium to ensure the cream never burns. Otherwise, cooking this recipe on the stove-top would require constant attention and frequent stirring.

As with most food bloggers, however, I often question their complicated methods and even wonder sometimes whether the recipe put forward was ever actually prepared in trial.  When I read this original recipe, it had two pounds of bacon and chicken, plus veggies, but only 3 cups of liquid.  That didn’t sound right and moreover, didn’t look right when I assembled the dish.  That gave me the opportunity to add the one ingredient the original author had not – a glaring deficiency, in my opinion – white wine!

As usual, I tweaked other ingredients as well.  The original recipe called for leeks, which have far more sugars than green onions, the latter of which I had on hand.  I used whipped cream cheese instead of the more common, denser block variety.  Most importantly, I used boneless, skinless chicken thighs, which in my opinion stand up to a Crock Pot all-day cooking without becoming dry and tasteless like chicken breasts would likely become.

This is a filling, hearty dish great for a chilly evening, and you will have leftovers unless you’re feeding a family of five.

The Recipe
Pre-heat your Crock Pot pot by filling it with hot tap water and turning it to “high” for at least fifteen minutes.

Using 2 tablespoons of the butter in a skillet over medium high heat, sauté the shallots, green onion, red onion and celery until the onions begin to caramelize, about ten minutes.  Add the garlic and sauté for another minute, then add the mushrooms and heat through, a couple of minutes more.

Remove all the vegetable to a platter and melt the remaining butter in the skillet, then sauté the chicken thighs on each side about three minutes.  You don’t want to thoroughly cook the chicken at this point.  Remove the chicken to a cutting board, and when cooled enough to handle, dice into bite-sized pieces.

Add the vegetables, bacon and chicken to the pre-heated Crock Pot, but reserve a couple of tablespoons of bacon for garnish.  Use the white wine to de-glaze the skillet, scraping up any of the brown crispy pieces, and add this to the Crock Pot along with the cream, cream cheese, chicken stock, chicken broth and seasonings.  Thoroughly stir until the cream cheese is melted and everything is well combined.

Cook four hours on high heat, then turn to low for another three hours. When you make the temperature cut-over, give the broth a quick test for seasoning.  You will not likely require any additional salt because of the bacon, but if you do, this is the time to add it.  Give the chowder a quick stir in any event before putting back the lid.

Serve the chowder in soup bowl and top with the reserved crumbled bacon for garnish.  If you’re not low-carbing, this would be good over white rice, over noodles or along side a baguette of crusty French bread.  You could also add potatoes to the recipe itself which would bring it closer to the typical interpretation of a chowder.  Cut Russet, Red or Yukon Gold potatoes into bite size pieces and add them only during the last hour of cooking.

Post-Script Cooking Tip for the Bacon:  The easiest method to cook bacon is on a foil-lined sheetpan in a 375 degree oven for about 30 minutes.  You will likely need two sheetpans for a pound of bacon and have to place them in your oven on two racks.  The top sheetpan of bacon will cook more quickly.  Remove it when the bacon is cooked to your liking and move the second sheetpan to the top rack for another 5-10 minutes.  Drain the bacon on paper towels before rough chopping the rashers on a cutting board. And of course, the aluminum foil makes for very easy clean-up.