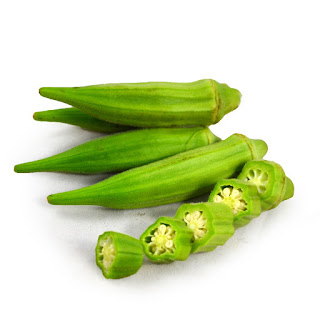 Okra is decidedly a very weird vegetable.  It is actually an edible seed pod that has mucilaginous qualities, which is why some people dislike it.  However, it is that slimy substance and viscous quality that gives Cajun Gumbo it’s texture and flavor.  In fact, in various sub-Saharan African languages, the vegetable is called gombo and is thought to be the origin of the name of that national dish of the South.

Okra is purported to have come over to North American via the slave trade in the mid-seventeenth century.  By the late eighteenth century, Thomas Jefferson documented it was well established in Virginia.  By 1800, fried okra was pretty much a staple in the South, a culinary fact that still exists today.

With my new kitchen toy, the Philips Airfryer, I experimented with trying to produce a reasonable facsimile of the traditional Southern Fired Okra recipe in a more healthful and low-carb fashion.  The internet is woefully inadequate with recipes of this nature, so I created this one on my own.

My Number One Fan, arguably the world’s foremost authority on Fried Okra, fondly remembers when she was a little girl her grandmother regularly making the dish in Waycross, Georgia .  Cut into bite size chunks with only the stem portion removed, and dredged in equal parts of flour and corn meal seasoned with salt and pepper, the okra was fried in batches in a cast iron skillet with an ample portion of Crisco that may, on occasion, have also contained bacon fat, which she kept stored in a coffee can on the back of her stove.  Her grandmother was able to flip pieces of the frying vegetable in the skillet using only her fingernails.

Pre-heat the Airfryer at 400 degrees for ten minutes. You will use the frying basket as is, without the optional insert that gives you a second shelf.

Placing your okra pieces in a small bowl, drizzle over the canola oil, and stir to ensure each okra piece is well coated.

Grind the pork skins until uniformly granular in a food processor, and put in a zip lock bag.  Add the Parmesan cheese, almond flour and black pepper, then shake the contents until well combined.

Put the okra pieces in the bag with the coating mix, and shake thoroughly to coat each piece.  Remove from the bag with a slotted spoon.

When the Airfryer is pre-heated, spray the basket with non-stick spray, and place the okra pieces in a single layer on the bottom of the frying basket.  Give them all a light dusting of non-stick spray, then cook at 400 degrees for five minutes.

Open the Airfryer and either shake the basket or use a spoon to stir the okra around a little, then dust them again with non-stick spray, and cook an additional 5 five minutes at 400 degrees.

Remove the okra to a serving dish and dust them with the fine-grain sea salt.  You can keep okra in a 275 degree oven in a dish lined with paper towels while you make the remaining batch(es).

I like my fried okra with ketchup.  My Number One Fan considers this blasphemous.