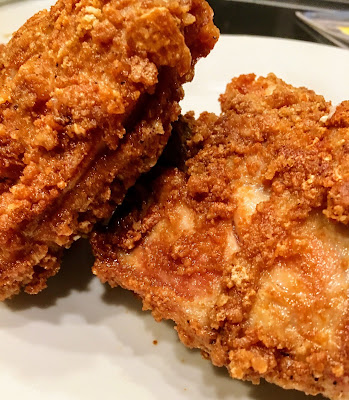 I’ve been on a quest to find the best substitute for Southern-style fried chicken, the kind that has been dredged in milk and eggs and seasoned flour, and fried crispy golden brown in a cast iron skillet with vegetable oil, like my dad used to make when I was a kid.  But I wanted something that contains fewer carbs, less fat and without a huge mess on the stove to clean up.  In this quest, I posted this recipe in 2011, Low Carb Oven Fried Chicken, which wasn’t bad. But as I read through that recipe again, it’s apparent that I felt it needed some tweaking, which I’ve yet to get around to.  Then in 2017, I  posted The Ultimate Oven Fried Chicken Wings which uses a two-step cooking method and baking powder as its “secret ingredient.” It was low-carb and delicious, to be sure, but still didn’t have the authentic Southern Fried Chicken crispy crust that I was craving, and preparing a chicken wing for any style of cooking takes a fair amount of work.

Then, my Number One Fan, gave me a Phillips Airfryer for my birthday.  The word “airfryer” is pure marketing which was created by the Phillips Electronic Company when the first airfryer was introduced to the consumer in 2010. In fact, an airfryer is a counter-top convection oven.  It circulates super-heated air to surround food in a confined space and cooks it fast and crispy, just like submerging food in hot oil; but with airfrying, of course, you are getting far fewer fat grams and calories, and none of the mess (and danger) of deep-fat frying.

While Phillips was first, they’re not the only airfryer available on the market.  There is probably a half-dozen makes now, all with varying bells and whistles and even the Phillips line has seemingly endless variations of sizes and options.  I think I have a pretty basic model, shown here.  It has two dials, one for temperature and one for time, and is super easy to use and to clean.  It is pictured with an optional cooking rack that costs extra, but a necessity, in my opinion, as it gives you double the space to cook things like airfried chicken.

Airfrying is gaining in popularity based on my Number One Fan’s constant reconnaissance of many popular cooking blogs.  But, the repository of recipes, especially low-carb ones, still seems pretty sparse based on my research.  I created this recipe after reading one very similar to it that was still meant for a traditional oven, and with apologies to the original author, I no longer have the website that provided me this inspiration.  Nevertheless, we made the most delicious facsimile of Southern Fried Chicken in our Airfryer, and it was hard to believe we were eating something low-carb that had not actually been deep-fat fried.

The Recipe
Trust me on this:  do not process your pork skins in a food processor.  Up until now, that was the only way I’ve deconstructed pork skins, however, on the advice of one blogger, I followed their method:  put the pork skins in a plastic zip-up bag and use a rolling-pin to smash them to granular size.  Using a food processor makes the pork skins too finely ground, and for some recipes, that’s what you want.  But not for this one.  The rolling-pin method leaves you with crunchy little bits that make the world of difference in the texture of the finished product.

Wash and thoroughly dry the chicken thighs; then dredge each piece in the beaten eggs until well coated, followed by a dredging in the pork skin coating.  Don’t be afraid to push the coating bits into the skin of the thigh until you have a solid covering of the coating over each piece of chicken.

Lay each thigh out as you coat them on plates (do not stack them) and allow to sit for ten minutes while you pre-heat the Airfryer at 400 degrees for ten minutes with the double rack inside.

Cook 30 minutes at 400 degrees.  At this point, you can remove the two thighs on the top shelf, and cook the two remaining thighs an additional 5 minutes.  This is easier than switching the thighs mid-way through the cooking process, which I’ve tried.  It takes too long, and the unit loses too much heat.  Either way, the chicken on the top deck will cook slightly quicker than the two pieces on the bottom desk.  I assume this has something to do with physics and thermal dynamics.

Each piece should be golden brown and crispy. You can test for doneness by piercing a thigh all the way to the bone with a fork or the tip of a knife.  If the juices run clear, the thigh is done.  If the juice has any pink in it, you need to cook for additional time, probably five more minutes would do it.