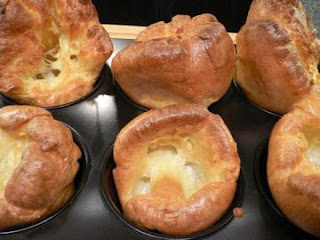 This recipe should really be called “Roast Beef and Yorkshire Pudding,” because that’s what you eat with Yorkshire Pudding.  This is, in fact, the national dish of Great Britain.  But I’ve already posted the quintessential roast beef recipe, Roast Prime Ribs of Beef Au Jus and you can click here to get it.  So, this is specifically the recipe for a most misunderstood dish by the American public, in part because anything called pudding in our country usually has the word “Jello” attached to it.  To us, pudding is a dessert and why the hell anyone would want to put dessert next to their roast beef entree just doesn’t make any sense.

And to make matters more confusing, the British generally refer to any dessert as pudding. So the entomology of this word would arguably serve as content for a Master’s Thesis.  I won’t go there.

But what I will say is that many years ago I assumed, logically if also incorrectly so, that Yorkshire Pudding, served along side roast beef, must be some sort of a savory custard-like accompaniment. That made perfect sense to me.  So, in 1976 when I sat down at a restaurant in Houston Texas operated by a British ex-patriot and ordered Roast Beef and Yorkshire Pudding, I was surprised that there was no such custard accompaniment on my plate.  I took note of what looked like a popover sitting at ten o’clock to my roast beef, but where in the hell was my pudding, I wondered.  So, I asked.  The server looked at me with utter disdain and pointing to the popover on my plate, levied sarcastically in a decidedly British accent, “Sir, that is Yorkshire Pudding.”

Okay, so it’s called “pudding” and it isn’t pudding by American standards.  It’s a popover.  Admittedly, however, “Roast Beef and Yorkshire Popover” doesn’t sound right, either.  And I think that the basic recipe, which I gather has been around since the eighteenth century, is something one could play around with, possibly adding chives and a bit of cheese to melt away during the last vestiges of cooking.  I’ll work on that.  But for now, I am posting the time-honored recipe for Yorkshire Pudding that dressed my table last evening, along side a slab of perfectly marbled, medium-rare prime rib.  When my Yorkshire Pudding soaked up the au jus, it was a culinary triumph.  Long live Yorkshire Pudding!


The Recipe
This dish is as much about technique as it is the ingredients, which as you can see are deceptively simple.  The first step is to preheat the oven to 450 degrees.

Take a 12-count muffin pan and put a pea-sized dollop of lard, or 1/2 teaspoon of vegetable oil in each muffin cup.

Crack your eggs into a glass measuring cup.  You’ll get close to a cup. Carefully measure out exactly the same volume of whole milk in another measuring cup. Do the same with the flour.

Combine the eggs and milk and using an electric mixer, blend well for 1-2 minutes.  Allow the eggs and milk to sit for ten minutes before sifting the flour into the egg and milk mixture. Blend again with the electric mixer and add the salt.  The batter should be completely lump-free and the consistency of heavy cream. You should let the batter sit for at least 30 minutes, but 2-3 hours is better.  This is to bring the batter to some semblance of room temperature, so it will properly rise when placed in the very hot oven.  If your mixing bowl doesn’t have a spout to make pouring from it easy, I suggest you move the batter to something that does.  It will make the last step in this process much easier.

Put the muffin pan into the 450-degree oven and heat it up until the oil just starts to smoke, about 10-12 minutes.   Add two tablespoons of water to the batter and mix it in with a fork.  Remove the muffin pan from the oven, then carefully and quickly pour the batter into each muffin cup until each cup is 1/3 full.  If you hear the batter sizzle when you pour it in, that’s a good sign that the pan is at the proper temperature.

Serve hot, straight out of the oven.  They do not keep or re-heat well, so enjoy them immediately.