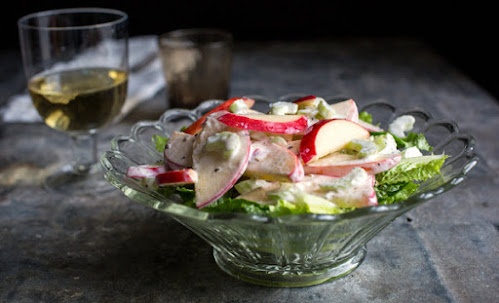 I’m starting to get down on bloggers who call their recipes “classic” when they are anything but. The American Heritage Dictionary defines “classic” as “serving as the established model or standard.”  In the world of recipes that means, to me at least, the first and original recipe, not later interpretations or iterations of the very one that started the trend.

I’ve seen recipes for a Classic Caesar Salad that are so far off the mark, they didn’t even get the name of the dish correct, which is Caesar’s Salad.  (I posted my version of this recipe and at least had the good sense not to call it “classic” because it wasn’t.  It was my version, and I named it as such, found here.)

A classic martini is made with gin, not vodka.  A classic potato salad uses Russet potatoes, not Yukon Gold.  And a classic Waldorf salad in its original form as introduced in that venerable hotel from which its name was taken in 1893 had just four ingredients: red apples, celery, mayonnaise and lettuce.

So, I take exception to the foodiecrush website for posting a “Classic Waldorf Salad” that contains grapes, sugar and whipped cream.

To be sure, many variations of the original recipe have since been created that include pecans, walnuts, raisins, even blue cheese.  There’s nothing wrong with any of that, and even the addition of green or black grapes is totally acceptable if that’s what you’re hungry for.  Just don’t call it classic.

My mom used to make Waldorf salad when I was a boy, and I’m pretty sure she used Miracle Whip instead of mayonnaise.  She didn’t call it classic, either.

Here’s the version I created after seeing several recipes on the Internet including the aforementioned foodiecrush website.  And it doesn’t have any grapes, sugar or whipped cream in it.

As for the kind of apple to use, I suggest a firm, sweet apple like Honey Crisp or Fuji.  The foodiecrush blogger suggested tart apples, like Granny Smith, which would explain why she put sugar in the dish.  Why not go with natural fructose instead?  But stay away from apples that are mealy in texture, like Golden Delicious. You want the apples to have some body to them and the ability to stand up to the acidity of the lemon juice.

And since I use lemon juice, not to mention its zest, pecans and sour cream, I won’t say this is a Classic Waldorf Salad, but it’s a damn good version.

The Recipe
Peel and core the apples, then cut into bite-size pieces.

Using a micro-plane, zest your lemon over the apples, then cut the lemon in half and squeeze the juice from both halves over the apples.  Toss the apples in the lemon juice to keep them from oxidizing and turning brown.

Add the celery, pecans, mayonnaise and sour cream and toss gently until everything is coated and combined.

Serve cold on a bed of crisp green lettuce.