My argument is that if you’re going to prepare a “classic” recipe, you cannot deviate from the original ingredients and manner of preparation and still call it by its classic name.  To do so is disingenuous.  There’s nothing wrong with changing a recipe; even perhaps making it “better.”  But if it isn’t the same recipe as the original classic that made it famous in the first place, it should not go by the same moniker without at least a little modification, like a “Reuben-Style Sandwich.” I realize that this is generally a losing argument since most people are ignorant or do not care about such matters, but it’s my recipe blog so I will post recipes according to my rules.

The Reuben Sandwich did not originate in New York City, although it arguably got famous there as a staple of any Jewish Delicatessen menu in a city where there may well be more Jewish Delis per square mile than perhaps anywhere else. One of the more famous in business for almost 80 years was Carnegie Deli, which used to be on 7th Avenue in midtown Manhattan until someone figured out they had been stealing their natural gas for six years off of a Con-Ed line before it reached the meter. Carnegie has been closed since 2015 at that location and exists now only as a concessions stand in Madison Square Garden and as a mail-order operation. 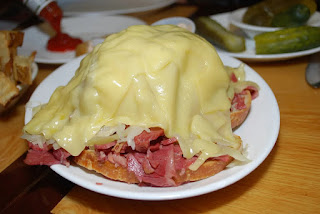 The first Reuben that I ever remember eating was in 1985-ish at the original Carnegie Deli.  And as fabulous as it was, it wasn’t really a Reuben.  You see, the deli had a gimmick which has since been replicated in many other delis across the country, which was to serve nothing less than a pound of meat in every sandwich.  Their slogan was, “If you can finish your meal, we’ve done something wrong.”  As such, the Carnegie Reuben was so enormous that it was actually served open-faced.  Delicious, to be sure, but not officially a Reuben, which is meant to be served on grilled dark rye bread.  Marble rye is the only acceptable alternative.  No, you cannot use sour dough bread. No, you cannot substitute provolone cheese. No, it isn’t a double-decker sandwich. No, a Reuben is not made with pastrami or Russian dressing. And no, a proper Reuben Sandwich is not meant to be eaten with a knife and fork.

The first Reuben Sandwich was made in Lincoln, Nebraska, not New York City.  It was concocted, allegedly, for participants at a poker game.  Now, this story is suspect in my mind because it sounds an awfully lot like a similar tale that accounts for the origin of the name “sandwich.”  That bit of folklore says that after the Earl of Sandwich did not wish to stop playing poker and ordered his meal stuffed between two pieces of bread.

It is, however, a matter of historical fact that the first Reuben Sandwich was made by a young chef, Bernard Schimmel who says that he named the sandwich after Reuben Kulakofsky, an alleged participant at the fabled poker game. It’s been reported that the Reuben sandwich may have been on a menu at the Blackstone Hotel in Lincoln sometime in the 1920s.  But for certain, it appeared in 1937 on a menu at the Cornhusker Hotel in Lincoln, Nebraska which was owned by the Schimmel family. The Reuben at that time, however, was just a regional specialty traveling only as far as Omaha to appear in the ’40s on the menu of the Golden Spur Restaurant.  It did not reach national acclaim until it won a national sandwich contest in 1956, sponsored by the Chicago Wheat Flour Institute honoring National Sandwich Month. That’s when it made headlines and won its deserved status as a sandwich icon.  But Chef Schimmel didn’t enter the sandwich recipe in the contest.  Fern Snider did.  She was a cook at the Blackstone.

In 1976, Schimmel receive final credit from the Joslyn Art Museum in Omaha for inventing the sandwich in the cookbook, Joslyn Presents Bernard Schimmel’s Masterpieces, and it was titled, “The Schimmel Reuben Sandwich.”  As with many a culinary magnum opus, the ingredients are simple and constitute the determinate tour de force that builds the quintessential Reuben.

A final word about the dressing.  For years, I thought the Reuben contained Russian Dressing, which was odd because I also thought there was no difference between Russian and Thousand Island Dressing.  It turns out that I was wrong on both counts.  While both are mayonnaise-ketchup based dressings with zesty flavors and creamy textures, similarities end there.

The key ingredient in Thousand Island Dressing is pickle relish, which makes it slightly sweet. It also contains lemon juice, olive oil, paprika, chives, a bit of mustard, diced hard boiled egg and a dash of Worcestershire Sauce. Russian dressing, on the other hand, is spicy with a horseradish and chili pepper profile, also containing chopped pimentos. It also did not originate in Russia, but New Hampshire.  Early versions contained black caviar, which is how it got its name.  Thousand Island Dressing is less disingenuous as it indeed originated in the Thousand Island region of the St. Lawrence River dividing upstate New York from Canada.

Here, then, is the original recipe for the Reuben Sandwich, as written in the Schimmel cookbook; as submitted by Fern Snider; as served for decades at the Blackstone and Cornhusker hotels.  Any different ingredients or other manners of preparation would make this sandwich “Reubenesque.” But not a Reuben.

The Recipe
(exactly as written by the creator)

Mix Thousand Island dressing with sauerkraut that has been drained.

Assembling procedure:  Spread outside each slice of dark rye bread with soft butter.  Lay bread, unbuttered side up, side by side.  Place Swiss cheese on each piece, corned beef on one piece, sauerkraut on corned beef and then put together for grilling on sandwich grill or skillet.  Press together with spatula and cook until brown and hot enough so cheese oozes.  Eat immediately.