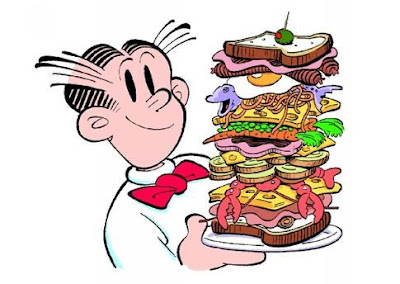 Dagwood Bumstead was a central character to the comic strip, Blondie, introduced in September of 1930 that was wildly popular throughout that decade and well into the 1950s, but I was surprised to learn that it is still in circulation today.  Its original creator, Chic Young, passed creative control of the comic strip to his son following his death in 1973. and with the exception of some minor modernization, such as Dagwood no longer wearing a hat when he goes to work, the comic strip retains much of its seminal style and pathos.

Dagwood was originally from a wealthy family who disapproved of his marrying Blondie Boopadoop and subsequently disinherited him from the family fortune.  Dagwood went from being a rich, bumbling playboy to a penniless, bumbling, middle-class office-worker. Blondie spent the first sixty years as a stay-at-home mom raising their two children, Alexander and Cookie. But in another move toward modernization, Blondie joined the ranks of working mothers by starting a successful catering business in the 1990s.  Dagwood was known for taking naps on the couch, engaging in shenanigans with the family dog, Daisy, being consistently late for work at the J.C. Dithers Construction Company and building gravity-defying sandwiches.  The Dagwood Sandwich was a staple on diner menus throughout the 1930s and ’40s.

What makes a Dagwood Sandwich in the real world?  It is loosely defined as a multi-layered sandwich with a variety of meats, cheeses and condiments skewered with an olive garnish but the rest is open to interpretation.  In the cartoon world, a Dagwood Sandwich might contain a much wilder list of ingredients that could include, as the header for this post exhibits, spaghetti, lobster and sushi.  A Dagwood sandwich, therefore, might best be discerned by its height and outrageousness.

In my world, the qualifiers for a Dagwood Sandwich must be a double-decker with three slices of toasted bread, a 50/50 ratio of yellow mustard and mayonnaise, a minimum of five meats that can include sliced roast beef, turkey, pastrami, ham, bologna, salami, and bacon; the later of which is required and non-negotiable.  It must further include at least three sliced cheeses, such as American, Swiss, Colby, Cheddar, Monterrey Jack or Provolone, and must be dressed with lettuce, sliced tomatoes and dill pickle chips.

Finally, the overstuffed sandwich is much easier to eat in halves in spite of what you see from Dagwood in the comics, so it must be cut in two triangular pieces.  Each half must be skewed with a filly toothpick topped quintessentially with a pimento-stuffed olive.  A baby gherkin is an acceptable alternative.

I’ll give license to alter my standards as refrigerator inventory dictates, but much less than the above description and I can’t really give it a justifiable Dagwood moniker.

The Recipe
After toasting the bread, make your fist layer with mayonnaise on two slices, and prepare a sandwich using three meats, two cheeses and the bacon. When you cap the sandwich, proceed with applying mustard to the two sides of the next layer. Apply two meats, one cheese, the lettuce and tomato. Salt and pepper the tomato, then lay out four or five dill pickle chips.

Insert a frilly toothpick into two opposing diagonal parts of the sandwich and using a very sharp knife, slice the Dagwood corner to corner into two triangles.  Top with the olive or a baby gherkin, and serve with potato chips.