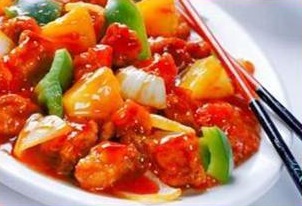 What to do with a leftover pork loin roast?  I was faced with that question and decided to try my hand at a recipe for sweet and sour pork.  After considerable research on the Internet, I devised may own recipe that came from many differing approaches, and bearing in mind that I prefer a wheat-free, no added sugar approach to cooking.  This actually came out very well, and would work fine with fresh pork, too.  But I may well buy pork roasts from now on a little larger than I would otherwise, just so I’ll have leftovers to make this dish.


The Recipe
Combine everything for the sauce and set aside.

Cut the bell peppers and onion into one inch by one inch squares.  Cut the tomato into eighths. Cube the pork. Drain the pineapple and oranges.  If they were packed in syrup instead of their own juices, drain and rinse them. The pineapple I used was the fresh cut variety you can buy in the produce section at your grocery store.

Place the soy flour, paprika and five spice powder in a plastic bag and combine well.  Then, toss in the pork and coat all the pieces.

Heat your wok until slightly smoking, then put in the peanut oil.  When the oil begins to slightly smoke, toss in the pork.  Chow for a couple of minutes as the pieces brown. Bear in mind, if you are using fresh pork, the cooking time will be
slightly longer.  I used a pork loin roast that had already been cooked.

Remove the pork to a platter. Add more oil to the wok if necessary, then toss in the onion and bell peppers.  Chow for five minutes or so until the onion starts to caramelize.  Add the pork back to the wok and pour in the sauce, the tomatoes, he pineapple and oranges. Chow until the tomatoes collapse and the fruit is heated through..

Add the corn starch mixture a little at a time until the sauce thickens, then serve with rice or on its own.