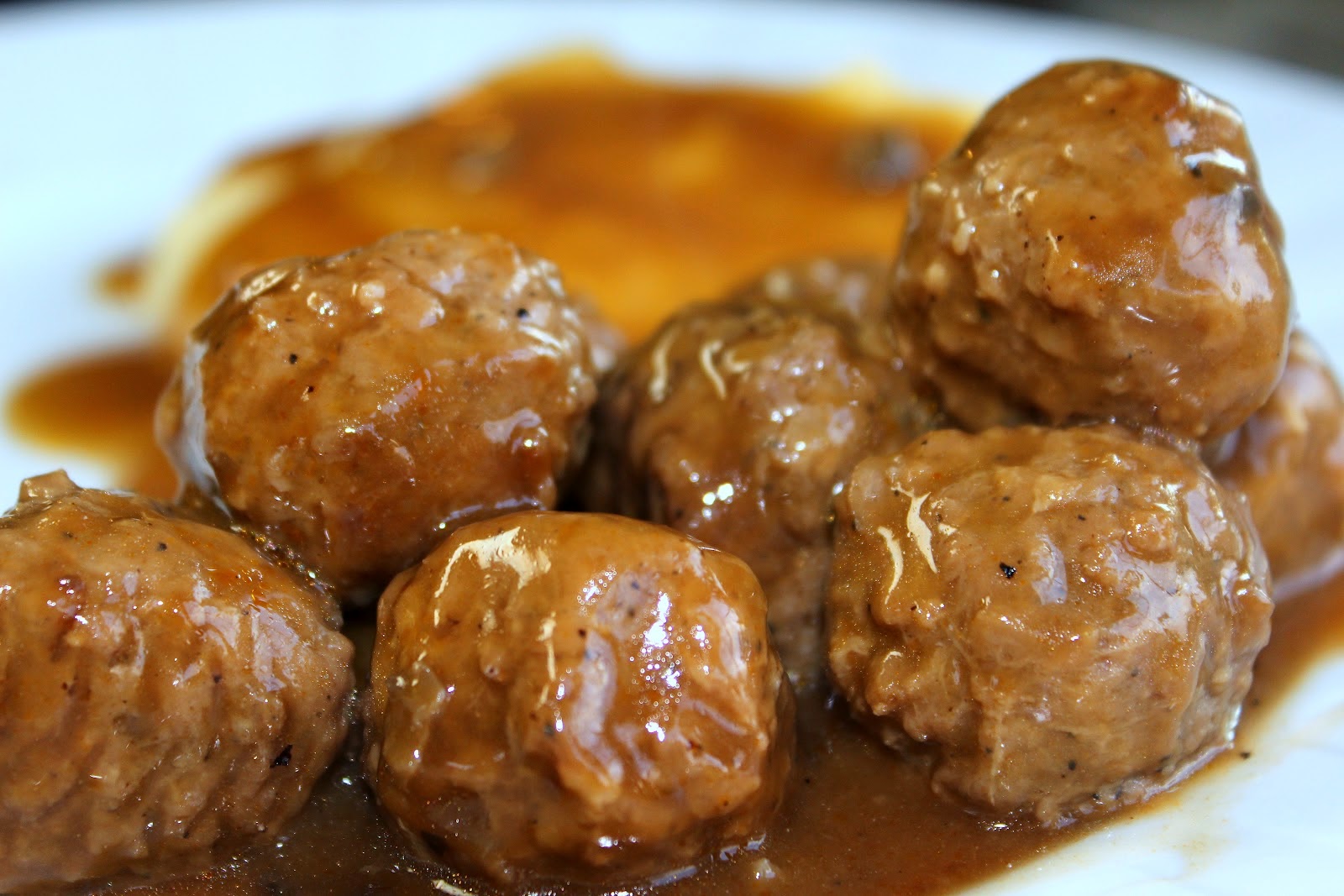 I’ve had versions of this dish over the years generally as an hors d’oeuvres at a cheap happy hour buffet somewhere, along with miniature egg rolls and those little cocktail sausages in barbecue sauce.  They were prefabricated and plastic, and just damned awful if not good for soaking up alcohol.  This recipe is nothing like that.  This is true, classic Swedish comfort food.

According to the American Swedish Institute in Minneapolis, the recipe for this dish first appeared in a European cookbook published in the late eighteenth century, after being made popular by word of mouth, no doubt.  It was brought to this country by Swedish immigrants and was considered a trendy dish in the 1950’s and 60’s.  Traditionally, the meatballs are made from ground pork or beef in a brown cream sauce, served with boiled potatoes and accompanied by lingonberry preserves. I served neither of those.  First, my neighborhood grocery store seems totally out of lingonberries and secondly, I think buttered noodles is a far better accompaniment. If you insist on potatoes, I would go with red potatoes, skins on and rough mashed with a little butter and cream.  Rice, too, would work just fine albeit less customary.

I don’t know who “Chef John” is, but he posted a recipe for Swedish Meatballs in allrecipes.com which serves as the basis for my recipe here.  According to some of the comments after his post, this apparently is an authentic recipe to what you would get if dining from a traditional Swedish Smorgasbord in, say, Stockholm, with the exception of the Worcestershire sauce and cayenne pepper.  I was more interested in flavor than I was tradition, so I left them in.  I also used beef stock, not beef broth, which is what Chef John used.  Again, I was going for flavor.

I did not use beef in my version here, but instead used 50/50 ground veal and ground pork.  You can certainly use either or only one of these, or all three for that matter.  It’s really up to you, and it’s all good!  Served along side some noodles and with a side of stuffed zucchini, and this was Sunday Dinner Fare.  My recipe for the Stuffed Zucchini can be found here, served as an accompaniment to another beef dish: Beef Tournedos with Mushroom Duxelle & Gorgonzola.

The Recipes
First, make the meatballs:
Melt the butter in a skillet over medium heat with the olive oil and salt, and then saute the onion until translucent and just starting to brown, about six minutes.

Transfer the onions to a mixing bowl and allow to cool a bit.  Add the milk, eggs, breadcrumbs, black pepper, nutmeg, allspice and cayenne pepper and stir to combine.  Then add the breadcrumbs and combine all ingredients well.

Mix the pork and veal into the breadcrumb mixture and blend all ingredients thoroughly so everything is evenly distributed.  Your hands are the best tools for this.

At this juncture, Chef John said to put the mixture in the refrigerator for an hour.  I suppose this would firm up the meat a bit and make it easier to roll them into balls. I didn’t have that kind of time and omitted that step, and everything came out just fine.  So, follow suit or not; your choice.

Preheat your over to 425 degrees.  With wet hands, roll 2-3 tablespoons of the meat mixture into golf ball sized meatballs and lay out in a single layer on a sheet pan or cookie sheet lined with foil and sprayed with the non-stick cooking spray.  The foil is for convenience of clean-up and provides no culinary value otherwise.

Bake the meatballs until browned, about 30 minutes. You can also blast them  for a couple of minutes with some heat from your oven’s broiler to ensure a bit of a brown crust on each meatball.  While not a necessary step, it will only add to the appearance and flavor profile of the dish.

While the meatballs are baking, prepare the gravy:
Melt the butter over medium high heat in a large sauce pan, then add the flour.  Using a whisk, stir to combine, making a roux.  Keep stirring until the roux takes on a slight brown color, about five minutes. Slowly whisk in the beef stock and bring to a simmer.  Add the cream, Splenda and Worcestershire sauce, and simmer until the sauce thickens and easily coats the back of the spoon, about 7 minutes.  Check for seasoning and add salt and pepper as needed.  If your gravy is not becoming thick enough, just combine a little more flour in a little water until thoroughly dissolved, and then whisk it into the gravy.  If you do this, however, be sure to bring the sauce back to a simmer and cook for another minute or two.

Finally, finish the dish:
Take the meatballs out of the oven and add them to the gravy, including any juices that may have accumulated.  Allow everything to simmer together for another five minutes.  Serve over noodles and when plated, finish the dish with the chopped parsley.