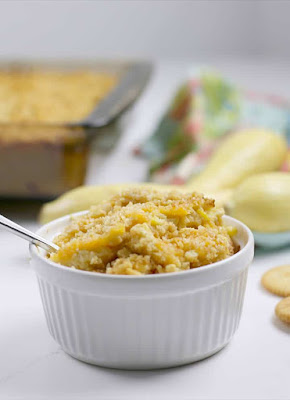 The true origination of this recipe cannot be known.  The summer squash as it is sometimes called, although available now almost all year long, or yellow squash, or as I call them, crook-neck squash, is indigenous to the North American continent and the earliest archeological record of their cultivation and consumption by neolithic humans is around 8,000 years ago.  It’s a safe bet that as the New World dairy production developed onward from the seventeenth century that someone somewhere got the idea of adding butter, cream and cheese to boiled yellow squash with onions and then baking it as a casserole over an open hearth fire.

But the modern origination of this recipe is an even better story.

The Internet abounds with squash casserole recipes, as varied and
diverse as you might expect, but this one seems to have the oldest
lineage because it’s the simplest.  It’s often referred to as “Southern
Style” squash casserole and in fact, the crook-neck squash grew wild throughout the southeastern US.

As modern dairy production took root in the late
1800s, this classic squash casserole emerged and since the earliest
twentieth century has been a staple menu recipe for many a church
social or potluck supper.  It’s easy to prepare and has transportability;
but most importantly, it tastes great.  It is, in fact, the only way I
will actually eat yellow squash.

This recipe specifically comes from a 3″ x 5″ index card written in the 16 year-old handwriting of My Number One Fan who grew up in a suburb of Nashville with her working mom who hated to cook.  Once My Number One Fan was old enough to drive, she volunteered to take over grocery shopping and cooking dinner in exchange for getting out of vacuuming the house, cleaning the bathroom and doing the laundry.

As was quite common in the 1960s, women’s social groups and certainly many churches would produce recipe books as fund-raisers with all contributions coming from their membership.  The origination of this recipe comes from just such a recipe book and was transcribed to a recipe card by the adolescent iteration of My Number One Fan, basically to get out of doing more housework.  My Number One Fan is a clever girl.

She’s made this recipe innumerable times, and it only occurred to me yesterday after making it myself that I realized I had never posted this to Kitchen Tapestry.

The one thing to bear in mind is that the recipe cannot be finite because the volume of squash used might vary, even if by weight you start with about a pound.  Generally, this recipe will hold true if you have roughly 2-1/2 cups of squash and onion after they have been initially cooked.  As you mix the ingredients together, and if  your mixture is too wet, add additional cheese.  If too dry, add more cream.  When your ingredients are combined in the proper ratios, the final mixture will be loose, but not runny.

I have a suspicion that this recipe found its way onto the back of a box of Ritz Crackers at some point in the 1950s or ’60s, although I cannot validate that.  But topping the casserole with crumbled Ritz Crackers is considered the only truly Southern way to finish this dish.  You may omit them, as I did, if you’re watching your carb intake and doing so will make this dish low carb and Keto friendly.

The Recipe
Cut away any blemishes on the squash, remove the ends and then cut into unpeeled slices, about 1/2-inch thick. Similarly cut the onion into 1/2-inch wedged slices.

Put the vegetables into a dutch oven or soup pot and fill with enough cold water to cover. Add 3 tbsp salt to the water and stir well until dissolved.

Bring the squash and onions to a boil, then back off the heat to medium low and simmer covered for an hour until the squash is very tender.  Drain well and allow the squash to steam off additional water, but don’t let it cool off too much.  Use a couple of paper towels to further soak up excess water if necessary.

While the squash and onions are still hot, add the butter to melt.  Then add the cheese, cream, egg, sour cream, nutmeg and the salt & pepper and mix well.

Pour into a 9″ x 9″ casserole dish treated with the cooking spray.  Level the mixture with a spatula and top with the cracker crumbs if you’re using them. Sprinkle paprika over the top.

Bake uncovered 30-40 minutes until the mixture is bubbly and the top has browned a bit.  As an aside, I like to eat mine with a good shake of grated Parmesan cheese on top after dishing up, and yes, I mean the Kraft green can kind.