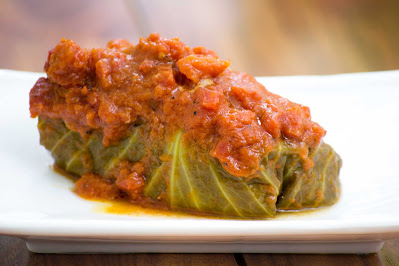 My mother was French Canadian, but I recall her mentioning that a fair number of Polish people lived in the small Ontario town where she grew up.  She said there were certain parts of the city where you could walk down the street and smell garlic cooking.  To be sure, someone there would likely have been making what some consider as the national dish of Poland, stuffed cabbage rolls, known as Golumpki, or more commonly, Golabki, or technically, Gołąkbi.  The word means “pigeon”.  Go figure.

What I find interesting is that if you search for this recipe on the Internet, many, if not most of them write about how it was passed down from their mother, grandmother, or even great grandmother.  Many recipes even make that as a titular statement, like Nana’s Golabki (there are many).  It seems that cabbage rolls among the Polish is sort of like red gravy is among the Italians.  And everybody has their own take on how to prepare the dish.  But they are all variations on the same theme: ground beef and usually also ground pork, mixed with seasonings that include marjoram and garlic, with added onions and rice, rolled up in cabbage leaves and baked in a sauce, most commonly, but not always, tomato.

My mother wrote her recipe down but even though I have a number of recipes from her in her own handwriting, I cannot find this one.  I’m heartbroken because I have fond memories of this dish growing up.  She made it dozens of times.  My dad loved it.  And, I’m pretty sure she used Campbell’s Tomato Soup in the sauce.  Since I’m watching carbs and sugar intake, I didn’t do that, but this is a close approximation of the dish I had many times, and one I repeatedly asked for when visiting home from college.  I did not add rice to the version I just made, but substituted 1 cup of grated Parmesan cheese (yes, the Kraft green can).

The Recipe
The hardest thing about this recipe is preparing the cabbage.  A lot of recipes I read have you boiling the entire head and peeling off leaves as they cook.  I thought that would make a very large mess, seemed an easy way to get burned and I don’t think that’s what my mother did.  So, I started by coring the head of cabbage and then removed as many of the broad outer leaves as the head yielded.  At some point, you’ll reach the white, inner part of the cabbage and the leaves are too small to be used.  In this case, that gave me about fourteen large leaves, which was about one leaf short of accommodating all of the stuffing mixture I had on hand.  Had I used rice instead of Parmesan cheese, I would have needed at least a couple more leaves.  So, it’s better to have more than enough, which is why my recipe calls for one to two heads of cabbage.  But you will not use all of them.

Bring a large pot of salted water to a rolling boil.  Have a colander nearby with something underneath to catch the runoff.

Put as many leaves in the water as your vessel will hold at a time (in my case, that was about three), and par-cook each leaf until it is malleable, about three minutes.  You’ll need to use tongs to submerge the leaves and turn them over for even cooking.  Remove each leaf to your colander and allow them to drain and cool. Continue this in batches until all of your leaves are par-cooked.

In a skillet over medium high heat, melt the butter in the olive oil, and then saute the onions until they are well caramelized, about fifteen minutes.  Add the minced garlic at the end, and saute for another minute, stirring constantly so the garlic does not burn.  Set the skillet aside and allow to cool.

In a large mixing bowl, whisk the two eggs and all of the dried herbs except for one tablespoon of marjoram.  Blend well.

Crumble the ground beef and pork into the egg mixture.  Add the onions and garlic.  Add the rice, if you’re using it, or the Parmesan cheese if you’re not.  Using your hands, mix the whole concoction until everything is evenly distributed.  As a tip, start with wet hands and less will stick to them while you’re playing with your food.

Now, comes the fun part. Lay out each cabbage leaf on a kitchen towel and make sure it’s dry on both sides.  If the leaf’s core stem is so large that it’s not allowing you to bend the leaf easily, use a paring knife to cut it out.  Spoon as much meat mixture in the center of the leaf as you think it will hold.  I can’t tell you how much because each leaf will be different.  You want as much mixture as the leaf will hold when its rolled up, but not so much that it won’t allow you to completely encase it with the leaf.  Fold the bottom of the leaf up, about halfway over the mixture.  Bring both sides of the cabbage leaf inward, and then roll the whole leaf upwards and over.  The seam should be on the bottom and the whole packet should be fairly tight.  Transfer it, seam side down, to a 9′ x 13 ” baking dish that has been sprayed liberally with the non-stick spray.  My mother would seal each of her cabbage packets with a wooden toothpick, but I didn’t find the need to do this.

Once all the cabbage packets have been prepared, pour the diced tomatoes and the tomato sauce over the whole affair and finish off by sprinkling on the remaining marjoram.

Seal the baking dish with aluminum foil and bake for two hours.