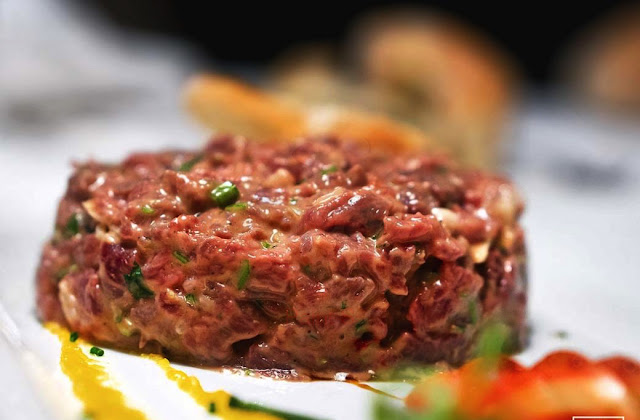 The origin of this recipe is steeped in misinformation commonly repeated by people who lack critical thinking skills and are too lazy to conduct a modicum of research.  The usual tale is that this recipe is called “tartare” after the ethnic group, known as the Tartars (notice the absent ‘e’) who ultimately became part of the Mongolian empire.  Allegedly, the Tartars would put a piece of beef under the saddle of their horses during the day.  The galloping, sweating horse throughout the day somehow transmuted the meat into a tender, delectable piece of beef the horsemen would then eat raw for dinner.

But wait.  Does that even sound remotely plausible?  Would you eat a stinking piece of raw beef that had been saturated in horse sweat? Granted, the Tartars knew nothing about refrigeration or foodborne bacteria, but they surely knew a rotting piece of cow flesh when they smelled it. The thought of consuming same is as disgusting as the story is false. According to the Cambridge Medieval History published in 1924, early chroniclers saw Mongols putting thin pieces of meat under their saddles, but as the book notes this was meant to heal horse wounds and saddle-sores, not as some absurd culinary preparation. The book specifically dispelled this version of the origin of Steak Tartare and cites that the meat would have been soaked through with horse sweat and entirely inedible.

Steak Tartare as we know it today has its roots in the European grand hotels of the early 20th century and was popularly called “Beefsteack a l’Americaine,”  It is not clear to food historians why the dish was associated with America, but likely this was nothing more than early menu marketing.  The dish of finely chopped beef was served with a raw egg on top of it, along side chopped capers, onions and parsley.  Its name changed when it began to be served along side tartare sauce (note the ‘e’).  This is not the mayonnaise and pickle relish concoction we eat atop our commercially prepared fish sandwiches today, but rather a more delicate sauce made with mayonnaise, crème fraiche, chopped parsley, chervil, tarragon, capers, and cornichons. The final vowel in “tartare” means that this is an altogether different word from the warring equestrians known as the Tartars.  But never mind the obvious lack of logic and historical facts, the story of Steak Tartare originating from the unhygienic food preparation practices of a horse-loving Mongolian ethnic group continues to be recited today.

So, too, will be the presentation method of putting a raw egg yolk on top of the beef, now mixed with the condiments that were originally served along side when the dish carried the moniker of “Amercaine.”  Well trained chefs know that this is archaic and off-putting to most people, so they fully incorporate the egg yolk into the steak mixture.

As I have written before, I learned a lot about tableside preparation at a swank hotel in the ’70s with recipes for Wilted Spinach Salad, Caesar’s Salad and Bananas Foster.  I made Steak Tartare hundreds of times using this classic recipe.  To be sure, there are other variations out there, but in my opinion, none are finer.

Tableside preparation has long since gone out of favor, but Steak Tartare, now prepared away from a customer’s view in the garde manger section of the classic Escoffier kitchen, has made a resurgence in recent years.  My only hope when ordering this delicious appetizer is that it has been made, as the French say, à la minute.  The dish is meant to be enjoyed freshly made and immediately served.

The Recipe
When you select your beef tenderloin or filet, pick one devoid of any fat. Look for consistent, deep red meat. Ask the butcher to run it through the meat grinder twice. Let the meat rest covered in your refrigerator for at least three hours before using in the recipe.

Salt a mixing bowl, which will serve as an abrasive for the next step, which is to mash the anchovy to a paste-like consistency.  Add the egg yolks, cognac, Dijon mustard, Worcestershire Sauce, Tabasco Sauce and black pepper and blend it together to a homogeneous consistency.

Add the beef and gently fold it into the sauce mixture until the meat is thoroughly coated.  Don’t overwork the beef.  Add the shallots, capers and parsley and slowly turn the beef until the last ingredients are evenly distributed throughout the dish.

Make the Steak Tartare into a patty shape on a chilled serving plate.  Cover the top of the patty with a piece of wax paper, and allow it to rest in the fridge for thirty minutes. This will allow the flavors to marry a bit, and it will firm up and chill the mixture.

Serve along side Crostini, Melba Toast or toasted slices of buttered French baguette.  For drama, you can add a few capers or finely minced cornichons on the plate that can be added to individual bites.

This dish is great along side a cold Bombay martini, or ice cold Russian Standard vodka shots.

And if you want to serve it along side something akin to the original tartare sauce, here is the recipe:

The Recipe
Blend all the ingredients together and allow to rest refrigerated for at least two hours before serving.