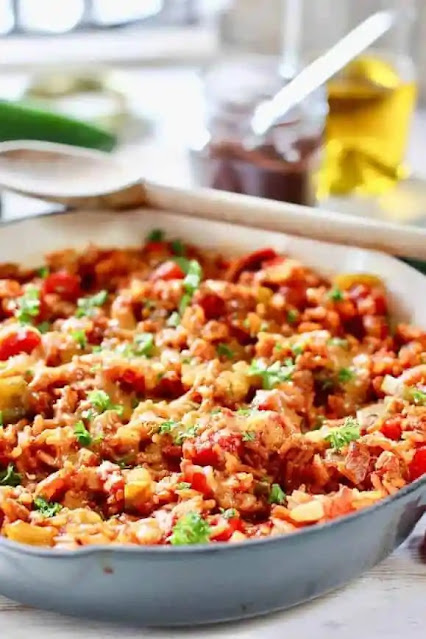 There is no doubt but that I am looking for greater simplicity in food preparation as I get older.  There are times when I still like to engage in a complicated dinner preparation of multiple courses for guests that I might be entertaining or for an otherwise special occasion. For an average weeknight dinner, however, I’m more and more these days just wanting something simple and quick, but without relying on too many pre-made, packaged or frozen options.  Last night, I was having my very easy to make Chilies Rellenos Casserole and Spanish Rice.

The only Spanish Rice recipe that I’ve published is from my 2015 posting A Mexican Supper which provided three recipes, the titular one included.  But it wasn’t my recipe; it was from the Better Homes and Gardens New Cookbook, 1968 and it is a multi-step version that requires chopping onions and green bell pepper, sauteing bacon and then assembling.  I just wasn’t in the mood for that kind of effort.  So, I improvised.

The Internet was no real help.  I found scores of Spanish or Mexican Rice recipes, many convoluted and complicated.  No one should ever put English green peas in a Spanish Rice recipe, but there they were; other used corn, black beans and one that had to label itself as a vegan version, had zucchini in it.  No further comment on that.

But a lot of food bloggers are confusing Mexican Rice, which is what you get at most Mexican restaurants, with Spanish Rice which are not the same thing.  Mexican rice uses a short grain rice and is cooked with little more that tomato juice and some seasonings.  Spanish rice, on the other hand is typically made with long grain rice and contains diced fresh tomatoes, some peppers and other seasonings.

I took what I had on hand, used the Better Homes & Garden’s recipe as a guide, and this is what I came up with.  I’ll never make Spanish Rice any other way.

The Recipe
Put all ingredients in a sauce pot with a lid and stir well to combine.

Place the pot on the stove over medium high heat until the liquid begins to boil.  Stir again and set the heat on low, allowing the mixture to lightly simmer for 30-40 minutes.

Start checking on the dish around the 30-minute mark.  Most, but not all of the liquid should be absorbed and the rice grains should be tender, but not mushy.