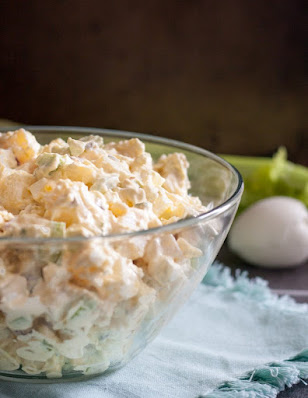 Potatoes, cooked in wine and dressed with vinegar and spices, was a dish allegedly introduced to the New World by Spanish explorers in the sixteenth century.  The first known published recipes for potato salad appeared in the mid-19th century and was brought to America by German immigrants who dressed potatoes in oil, vinegar and herbs.  It wasn’t until the 1920s and particularly until the Great Depression of the 1930s that mayonnaise, by this time widely and commercially available, found its way into what came out of the Deep South and is today generally considered as Southern Style Potato Salad.  Google it and you’ll find a lot of disinformation about what constitutes “Southern Style.”  Since I’ve lived in five states in the South and have eaten this common fare in all of them, I can speak with some authority on what makes “Southern Style” southern.

To be sure, there are tons of regional variations and every kitchen has their own little twist on a basic recipe.  But there are six necessary ingredients to be genuine to the original thought behind this dish, which grew in popularity during the Great Depression because it was filling and inexpensive to make, not to mention delicious.

First and foremost, Southern Style Potato Salad uses one and only one kind of potato: Russets.  Why?  Because during the Great Depression, it was about the only potato available and certainly the cheapest.  Now, you can make potato salad out of other kinds of potatoes, like Yukon Gold or New Potatoes.  You can substitute any other kind of potato in this recipe, and that’s fine.  But to be truly “Southern Style,” Russets are non-negotiable.  Some people think Russets aren’t a good potato to use in any potato salad because they get mushy.   For instance, here’s some dubious culinary advice from a 2009 article on the NPR website, Rethinking Potato Salad:

Wrong!  They don’t hold their shape and tend to get mushy if you cook them too long, you moron!

The other five ingredients that must be present in the dish to qualify for the moniker of “Southern” are: boiled egg, onion, pickles or, more commonly, some type of pickle relish, mustard and mayonnaise, and substituting Miracle Whip for mayonnaise is never allowed.

The type of onion to use is an issue of some debate. Some people like sweet yellow onions, such as Vidalia, Walla-Walla or the Texas 1015.  Other people like red onion.  I think very few cooks would use regular yellow onion and certainly not Bermuda white onions which would completely overpower the dish.  I prefer green onions.  They are mild and brighter in flavor than their fatter cousins and they add more color to the plate. It’s likely that potato salads of the Great Depression era probably mostly used green onions because they are easy to grow in any garden.  In some areas of the south, they grow wild.

Everything else is window dressing.  Some recipes add celery or green bell pepper.  Fine. I think celery is probably the more common addition to the basic ingredient list and in point of fact, my recipe requires it.  Not bell pepper, though.  I personally think a bell pepper competes with the overall flavor profile of the dish rather than aligns with it.

The only two culinary skills one really needs to make this recipe is the ability to chop vegetables into relatively small and consistent shapes.  The other is to keep a close eye on the kitchen timer.  You do not want to overcook your potatoes but neither do you want them under-cooked, and the window of time between those two events is very short.

Put your potatoes in a pot and cover them in cold water, plus 2-3 inches.  Add four tablespoons of salt to the water and place the pot on the stove over high heat.

If you’ve never done this before, take a fork and spear a few chunks of potato.  This is so you can feel the potato when it’s raw and be able to compare that to one that’s cooked.

When the potatoes start to boil (which will take 10-15 minutes depending on your stove), set your kitchen timer for ten minutes. At the ten minute mark, spear a few chunks of potato.  It should yield immediately without much resistance. This is, in fact, referred to in culinary terms as “fork tender.” Take one of the largest chunks of potato you can find out of the water, blow on it to cool it and taste it.  If it’s done, you’ll know it.

I doubt you will need more time, but if you do after ten minutes, check your potatoes every 1-2 minutes; no longer.  Again, you want your potatoes cooked, but still firm enough to hold their shape.

Drain the potatoes well through a colander and run cold tap water over them to stop the cooking process.  When the potatoes have cooled down, put them in a mixing bowl and then put the bowl with the potatoes in your refrigerator for at least thirty minutes.  An hour is better.  You want them dry and cold when you begin to assemble the salad.

While your potatoes are chilling out in the fridge, finely dice your celery.  To do this, turn the celery stock rib-side up.  Cut the stalk lengthwise along the outermost rib, then do the same every other rib.  Then cut the long slices perpendicularly to end up with very finely diced celery.  You should have about a cup, more or less.

Very thinly slice the green onion.  If you have a particularly fat green onion, just slice it in half lengthwise first.

Slice each cornichon lengthwise once or twice, then dice them finely.

Finally, dice up your three hard boiled eggs.  Just cut them first into slices and then chop them roughly, but finely on your cutting board.  Consistency of size is less important here.

To assemble the dish, put everything together in your mixing bowl and gently fold the ingredients together from the outside of the mixing bowl inward.  Take care not to masticate the potatoes by over mixing or mixing too roughly or you’ll wind up with mashed potatoes.  At this point, you may need to add a little more mayo or a little more mustard.  You want the ratio of mayo to mustard at 2:1.  Be sure everything is well coated, but not swimming in the dressing.

Taste for seasoning.  You may or may not need more salt and freshly cracked black pepper is required.

Some recipes call for a sprinkle of paprika, but I think this is for show more than flavor.  I don’t recommend using it.

The potato salad needs an hour or longer back in the refrigerator for all the flavors to amalgamate.

And, if you’re preparing this for a pot-luck supper or a picnic somewhere, bear in mind the mayonnaise.  Left un-refrigerated for anything longer than three hours, and you’re asking for trouble.