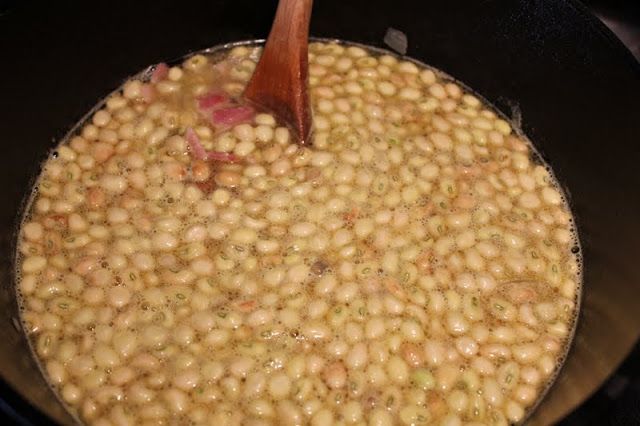 Without the moniker “Southern Style,” the reader might mistaken this recipe for something entirely different, called Creamed Peas, which calls to mind the axiom “grammar matters.”  The past tense of the word “cream” gives a clue to the difference, in this case, English green peas that are creamed after the fact.  The basic recipe are cooked green peas mixed with a basic Bechamel sauce and perhaps served with some sliced mushrooms.  There’s nothing wrong with that, but again, the cream comes later.  Cream peas, on the other hand (note the lack of past tense), produce their own delicious creamy broth, known in culinary terms as pot liquor.  Cream peas are popular in the South to this day, and for good reason.  They’re versatile and delicious.

They also, technically, are not peas at all, but beans.  First, to be clear, peas and beans are both edible seeds harvested from inside a pod technically belonging to the same general seed family called Fabaceae. Peas, however, are usually referring to the round seed of the species Pisum Sativum.

Peas are round and mostly green.  Beans, on the other hand, can be a wide variety of colors and shapes, but no matter, the terms peas and beans have been used interchangeably for generations.

Cream Peas – which is the subject of this post – generally refers to a variety of bean cultivated throughout the South known as cowpeas or field peas, so named because they were grown as a
rotational crop in the fields instead of in kitchen gardens.

According to a Southern Living article, “Eat Your Peas”:

Dozens of different types [of field peas] —what we now call heirloom selections—were
grown in Southern communities that valued them for their flavor and
ability to flourish in local conditions. Families and neighbors often
saved the seeds and passed them down through the generations. We still
have heirloom types in the South with charming, descriptive names such
as Whippoorwill, Dimpled Brown Crowder, Turkey Craw, Washday, Red
Ripper, and Old Timer.

Basically, field peas fall into four major groups: Crowder, Purple Hull, Zipper and Lady.  The latter includes a popular variety known as White Acre Cream Peas.  Lady peas generally have no color with a sweet, nutty flavor and produce a delicious, clear pot liquor.Regardless of the kind of Cream Peas you use, this is a basic Southern recipe, tested recently on a pound of Camillia brand Lady Cream Peas.  Note that the package instructions and cooking time vary greatly from my recipe.

The Recipe
Mix all ingredients together with 8 cups water and bring to a rolling boil over high heat for ten minutes. Set heat on low and allow peas to simmer for two hours. Liquid will be low at this point, so add 4-5 more cups of water, and bring to a boil, then back off the heat to a simmer for another two hours. Stir occasionally throughout the four hours cooking process. Enjoy with or over cornbread.