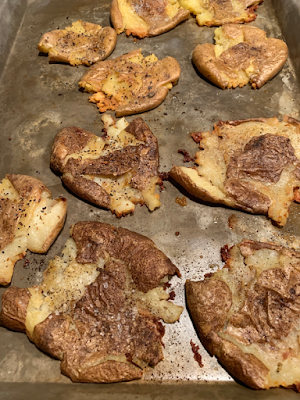 This is more about technique than about a recipe, per se.  There are very few ingredients:  potatoes, of course, then olive oil, duck fat, sea salt and freshly cracked black pepper.  But you can let your imagination go from there.  Originally found on the Shockingly Delicious recipe blog, it was called “Crispy Smashers” and then after the fact, “Irish Roadkill.”  Whatever.  I used her recipe only for inspiration and did very little else she did, although her smashing technique was clever and one which I adopted.

And duck fat.  She didn’t use duck fat.  And I have to say (like that guy did in the second John Wick flick): “Duck fat…..makes all the difference.”

There are many variations on this theme if you search for it.  Separately cooked potatoes are smashed whole, then cooked a second time at a higher temperature until they are crispy.

As usual, I find a good deal of food bloggers, many of whom cannot write well and some of whom can barely cook well, tend to overlook the obvious and complicate recipes that actually require simplicity.  You can put anything on this potato you want, but after it’s cooked. Like Waffle House’s famous hash browns – scattered, smothered, chopped, diced, covered, et cetera – the potatoes are cooked first.  Everything else is window dressing.

And what kind of potato?  Most bloggers recommend red potatoes, new potatoes or Yukon Gold.  I made a batch of Russets and Yukon Gold since that’s what I had on hand and actually, I wanted to see if there was any flavor or texture difference.  There is.  While the Russets will do in a pinch provided they are small, Yukons won the toss.  And while Yukons are still my favorite, I have had good success with red potatoes, but if you use them, adjust the cooking times to just thirty minutes for both the pre-cooking and finishing parts of the recipe.

The main thing is, you want potatoes about the size of a large egg, or something larger than a golf ball, but smaller than a tennis ball.

Many bloggers either conducted the first round of cooking the potato in the microwave or by boiling them, but I decided to cook mine in the oven.  It seemed more logical and less hassle, and I think I was right.  I usually am.

I did a shake or two of Montreal Steak Seasoning on a couple of the potatoes.  Not bad.  But just salt and pepper is good, too.

You’ll need a large sheet pan for this so that you have room enough between each potato after smashing them, but the ingredients are otherwise simple.

The Recipe
Pre-heat the oven to 400 degrees.

Wash and dry the potatoes thoroughly, then rub them in olive oil.  Roast in the oven on the top rack for 30-50 minutes until the potatoes are fork tender.

Remove the sheet pan from the oven and allow the potatoes to cool for 15-20 minutes.

Using a paper plate folded in half to protect the palm of your hand, smash each potato until it spreads out in an even, relatively thin layer.  You want the potato to be as thin as possible without masticating and separating it.  This will assure you wind up with some crispy goodness.

Drizzle a teaspoon or so of duck fat onto the top of each potato and spread it around a little.  Then dust each potato with sea salt and freshly cracked black pepper, or the Montreal Steak Seasoning.

Return the sheet pan to the oven on the top rack for 30-40 minutes until they are browned and crispy.

You’ll wind up with a smashed hockey-puck of a potato that will be crispy on the edges and creamy in the center, and you should be able to pick them up without them crumbling.