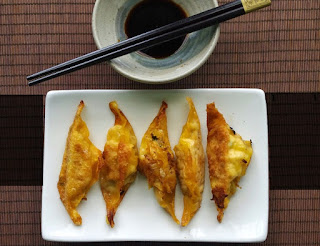 So, a few months ago (a few posts down), I made Oven “Fried” Crab Rangoon.  I had a ton of won-ton skins left, which I froze.  I was unsure if they would thaw and be usable, but was delighted to find out that they survived very well, and this even though I had gone two months past the time-frame the package verbiage said I should have used if frozen.  We keep a bag or two of frozen shrimp, already peeled, de-veined and cooked on hand so this was a pretty easy dish to make.  It was a bit time-consuming due to the length of time it takes to put the Potstickers together, but well worth the investment.

A Potsticker is a fried dumpling.  I chose to go the traditional fried method in this case, rather than doing the “oven” fried experiment I chose with the Crab Rangoon.  As usual, I jimmied with the original recipe which was posted to the Food Channel website by Sunny Anderson.  In the first place, Potstickers are made with round won-ton skins and mine were square.  So my Potstickers came out triangular in shape, rather than the half-moon shape of the traditional recipe.  It did not matter in the slightest.

The one thing I learned upon embarking on this culinary adventure is that the shrimp mix, if made with thawed shrimp, might be too wet.  I found it necessary to squeeze the shrimp mixture in a couple of paper towels to draw out the moisture.  You want the mixture that serves to stuff each Potsticker to be wet, but not runny.

The original recipe also called for a pound of shrimp and would yield about forty Potstickers.  I cut the amount of shrimp roughly in half and wound up making about two dozen.  That worked perfectly well for a dinner for two served along side some Chinese Fried Rice.  You can find my recipe for that here.

Put all the ingredients for the dipping sauce in a bowl and whisk well to combine.  Set aside until the Potstickers are ready to serve.

Put all the ingredients for the Potsticker except the won-ton skins and peanut oil in a food processor.  Pulse the processor until the ingredients are combined, but still a bit chunky.  If your mixture is too soupy, just dab with paper towels.  You want it moist, but not runny.

Now, take about half a teaspoon of the mixture and place it in the center of the won-ton skin.  Dip your finger in a bit a water, and rub it on the outside border of the won-ton skin.  Fold over one corner to the other to make a triangle.  Press down on the edge of the folded Potsticker with the tips of the tines of a fork.  This will seal the won-ton shut and give the edges a crinkle that is somewhat traditional with the classic recipe.

In a large skillet, heat the peanut oil over medium high heat until shimmering.  In batches, begin careful not to over-crowd the pan, fry the Potstickers 2-3 minutes per side and drain on paper towels.

Serve hot along side the dipping sauce for an appetizer, or add a bowl of Chinese Fried Rice and make it a meal.