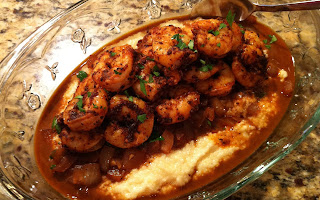 A time-honored recipe of the deep South, and in particular the low country of South Carolina, there as many variations of this dish as there are cooks that make it.  Once you’re past the shrimp and grits part, the rest is left to the culinary imagination.  However, I think most everyone agrees the grits should have cheese in them, and the shrimp should be accompanied with some form of pork fat:  bacon, country ham or in this case, pancetta.  Pancetta is often referred to as Italian bacon, but unlike its American counterpart, it is salt cured and not smoked.  Regular bacon will do in a pinch, but even though I haven’t tried it, I think country ham might be the Holy Grail. This shrimp and grits recipe was adapted from one by “Ellie” at the blog Vintage Victuals.

The Recipes
First, prepare the shrimp:
Combine in a small bowl the shrimp tossed in the olive oil, Cajun seasoning, paprika, Italian seasoning, and the pepper. Toss again until the shrimp are well coated. Set aside.

Next, make the grits:
Add the chicken broth and 1 tablespoon butter into a heavy saucepan. Bring the mixture to a full boil. Slowly add in the grits, and whisk constantly, cooking over medium-low heat for 5 minutes. Add the tomato paste, the cream, and the cheddar cheese. Continue to cook and whisk for 2-3 more minutes, until grits become very creamy and thick. Cover and set aside.

Now, cook the shrimp and pancetta:
In a large skillet, melt 1 tablespoon of butter over medium heat. Add the pancetta and cook until almost crispy, about five minutes.  Add the green onions and cook a minute minute more until they wilt. Pour in the spiced shrimp and sear for about 2-3 minutes, or until they are just done. Add the garlic and cook, stirring, for about 30 seconds. Remove the shrimp from the pan to a clean bowl and set aside.

Finish the sauce:
Return the pan to the stove. Add the flour to the drippings, stirring to make a roux. Cook the roux for 10 minutes until medium tan in color. Slowly whisk in the chicken stock and the cream. Cook for 2 minutes, and then add the Worcestershire sauce and hot sauce, and lemon juice.  Add fresh parsley at the end.

Assemble the dish:
To serve, place the shrimp on a bed of the hot grits, and top with the sauce. Garnish with additional fresh parsley.