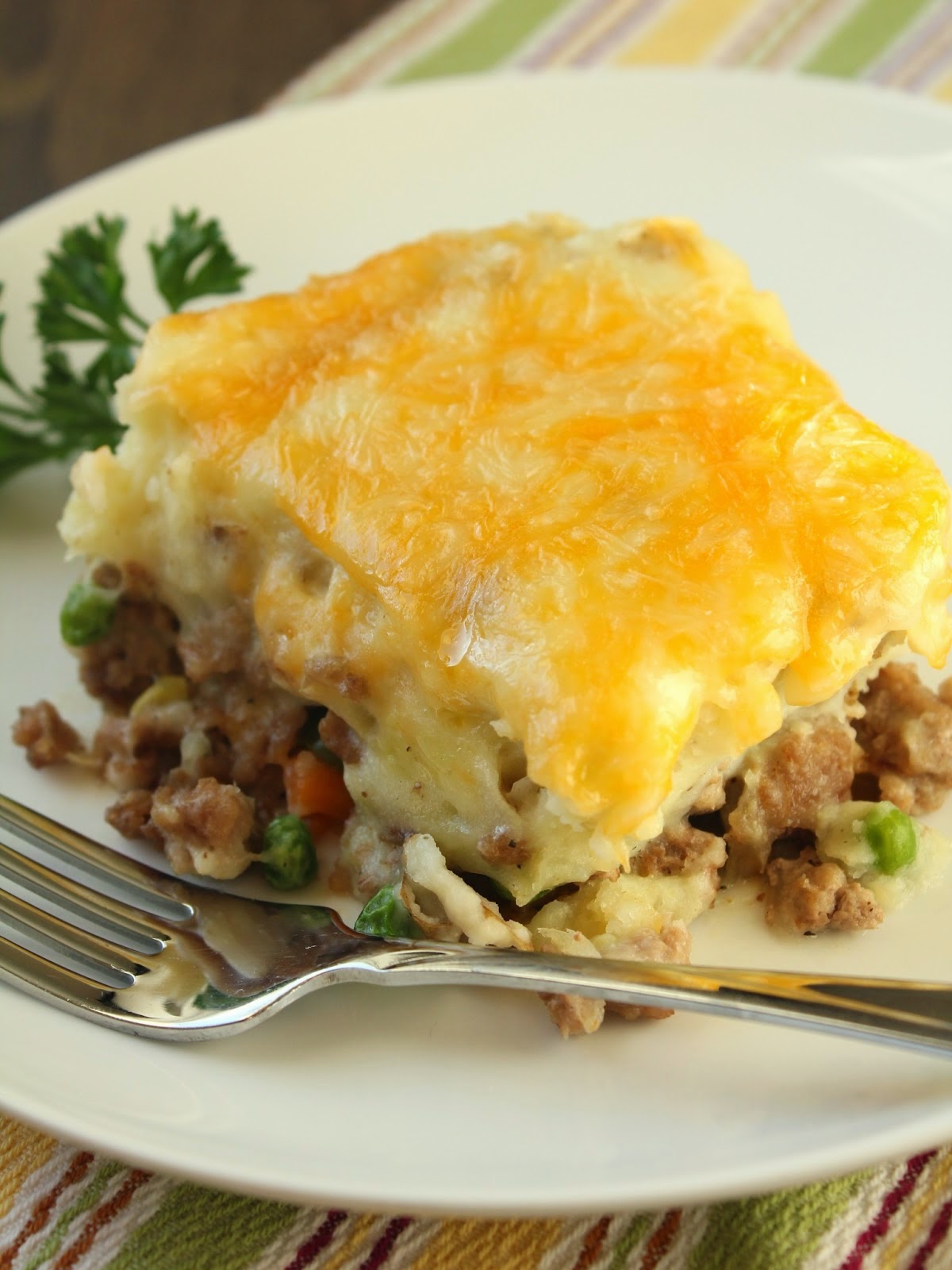 In honor of Saint Patrick’s Day, I decided to try my hand at making Shepherd’s Pie.  Normally for St. Pat’s day, I would do my version of Corned Beef & Cabbage for this non-holiday holiday (recipes here: Roasted Corned Beef Brisket with Mustard Sauce; Fried Cabbage with Caraway), but I made those dishes just a month or so ago and My Number One Fan and I were not in the mood for it again.  Shepherd’s Pie is basically a casserole.  There are many variations on the theme, but the common elements are ground meat and vegetables in a savory broth, topped and baked with mashed potatoes.  I think more traditional recipes call for lamb, or a combination of beef and lamb, which was the route I took.  Combined with a nice Irish Red Ale, in this case Smithwick’s, and it was a great way to remember the patron saint of the Emerald Isle.

You will need a 9″ x 13″ Pyrex glass baking dish for this recipe, or something similar that is long and low.

I adapted this recipe from an iPhone recipe app called Big Oven, but they had over twenty Shepherd’s Pie recipes, as diverse as you can imagine.  I think this version with both lamb and beef, and onions, carrots, peas and mushrooms would be the more traditional approach.  Putting cheese on top, however, is not traditional, but it fit my mood at the moment.

The Recipes
Peel and roughly dice the potatoes; the smaller you dice them, the quicker they will cook.  Cover with cold salted water in a large pot.  Put on the stove over high heat and boil until the potatoes are fork tender (20-30 minutes after the water comes to temperature). You can start the rest of the recipe while the potatoes are cooking, but when they’re done, drain well.  Then mash by hand with a potato masher with half of the butter and a splash or two of the cream.  You can use milk as a substitute.  You want the potatoes firm and just a little lumpy.

In a large skillet over medium high heat, add a little olive oil and saute the beef and lamb until all pink is gone.  Season with salt and pepper while you cook.  Remove the meat from the skillet onto a platter using a slotted spoon.  You want to make sure the meat is drained of any liquid or grease, which you can discard.

With a little more olive oil and continuing over medium high heat, saute the red onions until they “sweat” but not brown, 3-5 minutes.  Add the carrots and saute until they are limp, another 4-5 minutes or so.  Add the remaining half of the butter and when melted, toss in the mushrooms.  Cook until the mushrooms are reduced and limp, about 8 minutes.  Add the green peas, green onions and tomatoes, continuing to saute for another couple of minutes.  Then add the ground meat back into the skillet, with the thyme, parsley and season with salt and pepper, then stir well to combine all the ingredients together and heat through.

Make a slurry out of the chicken stock and the flour by combining and whisking until blended. Pour into the mixture and bring the liquid up to a simmer allowing it to thicken.  You should have a little liquid in the bottom of your skillet that would coat the back of a spoon, but the dish should not be runny.

Remove from the stove and allow to cool for ten minutes before assembling the dish. Pre-heat your oven to 400 degrees.

Spray a 9″ x 13″ baking dish with Pam.  Pour the meat and vegetable mixture into the pan and smooth out so the top is more or less level.  Then spoon the mashed potatoes to cover the top of the meat and vegetable mixture fully, using the back of a fork to spread the potatoes as you go.  The layer will only be 1/8″ to 1/4″ thick.  (If you really, really, really like mashed potatoes, you can cook more of them and make this layer deeper.  Some recipes of Shepherd’s Pie go for a 50/50 blend of potatoes to the meat/vegetable layer.  When in doubt, better to have made too many potatoes so you can cover the entire surface of the casserole.  With my recipe, three large Russet potatoes was just enough.

Cheese is not traditional, so if you’re a purist you can omit it and cook the casserole until the potatoes are slightly brown on top.  While not traditional, cheese on top just made sense to me, and some recipes I researched call for it.  You can probably use any kind of hard shredded cheese, but I wanted a sharp cheddar.  I covered the top of the potatoes and cooked in the 400 degree oven until slightly browned and bubbly, about 30 minutes.

Allow the dish to cool five minutes before cutting into square portions.  You could have a small green salad with this for a well rounded, balanced, nutritional meal.  But my Smithwick’s Irish Red Ale was the only accompaniment I needed.