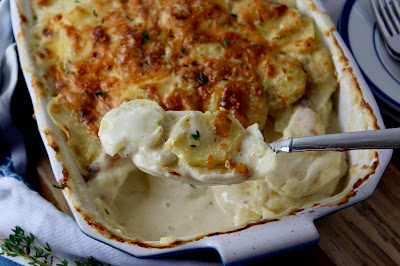 There seems to be a little confusion as to the difference between what is commonly referred to as Scalloped Potatoes versus Potatoes Au Gratin.  Betty Crocker even packages their instant versions of these recipes both ways, with essentially the same ingredients.  “Scalloped” refers to the shape of the potato, while “au gratin” is a culinary term that means a dish is topped with cheese and bread crumbs.  I think the bottom line is that all Scalloped Potatoes are “au gratin” if you put cheese and bread crumbs on top of them and bake them to a golden, crispy state, while all Potatoes Au Gratin are not necessarily scalloped.  In any event, this is a rich potato casserole recipe and you can make as much or as little as you wish.

I used a baking dish that was 7×11 and about two inches deep, which allowed for four layers of potatoes, cream, butter and cheese.  This was a perfect accompaniment to our New Year’s dinner with Marinated Tenderloin of Beef with Sauce Bearnaise and my Arugula and Spinach Stuffed Tomatoes. A convenient kitchen appliance for this recipe is something called a mandolin, which allows you to quickly slice potatoes into thin wafers (or scallops).  It’s not altogether mandatory, but I wouldn’t make this dish without it.  See what one looks like here.

You can use either Yukon Gold potatoes, which I prefer, or Russet potatoes, but if you use the latter, be sure to soak the slices in cold water, then rinse and dry them before assembling the dish.  Russet potatoes have a lot of starch in them and without the rinse, they tend to become gloppy and lose their scallop shapes.

Pre-heat oven to 325 degrees and then spray a 7-inch by 11-inch baking dish liberally with the non-stick cooking spray.

Layer the scalloped potatoes end to end in a single layer all along the bottom of the dish.  Add 1/2 teaspoon of the minced garlic all about the layer of potatoes.  Cut each butter pat into nine dollops, and put twelve dollops evenly spaced about the layer of potatoes.  Add half the cheddar cheese, then drizzle two tablespoons of heavy cream all about the potatoes and cheese. Add salt and pepper, then top off with three slices of provolone, torn such that you get more or less even coverage over the layer.

Repeat again, using the Parmigiano-Reggiano cheese instead of the cheddar, then do two more layers the same way for a total of four layers overall.

Melt the four additional tablespoons of butter and mix with the seasoned bread crumbs in a mixing bowl.  Once the butter is absorbed, sprinkle the bread crumbs over the top of the casserole.

Bake an hour until golden brown on top.  Allow to sit about  ten minutes before cutting into squares and dishing up.