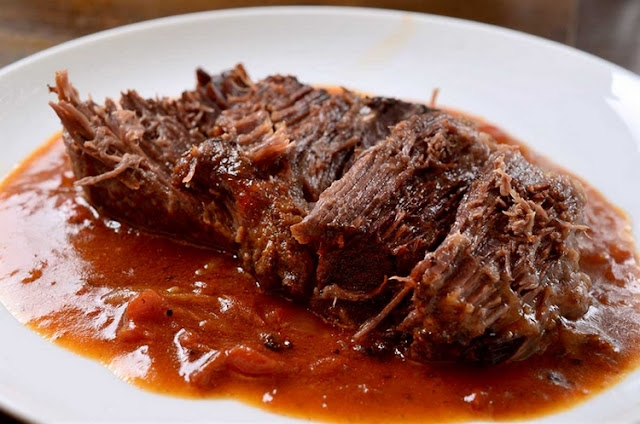 This is a re-posting of a recipe I published originally in July of 2010.  But I’ve made modifications to it and completely altered the cooking method from stove top to an oven-braised process.

Sugar Busters was one of the low-carb diet fads of the late 1990s.  The original book was written and published in 1998 by four New Orleans physicians, and the book was called Sugar Busters – Cut Sugar to Trim Fat, with the subtext of, “Featuring easy recipes from New Orleans’ top restaurants.” And therein lies the rub.

The author of the Forward for this book was Ellen Brennan, wife of Theodore Brennan and co-owner of one of the more famous New Orleans’ restaurants, Brennan’s.  It seems that Ellen liked the idea of a Sugar Busters cookbook concept so much that she hijacked it. Following the success of her first cookbook, Breakfast With the Brennans, she followed suit with Sugar Bust for Life…With the Brennans, hoping to not only cash in on the notoriety of her own name, but also that of the Sugar Busters franchise since her Forward in that book had undoubtedly helped to sell it.  All sorts of legal posturing ensued such that the name of the book was changed for its second printing which was titled, Sugar Less for Life…With the Brennans.

By the time Ellen was ready to release another recipe book with the same theme, all legal matters had been resolved in good ol’ New Orleans’ undisclosed fashion, and their second book reclaimed the “Bust” for “Less” and was called, Sugar Bust for Life…With the Brennans Part II.  Only now, there were legal disclaimers everywhere.  The front cover reads (in a color and font not easily seen, mind you), “This book is not sponsored, affiliated or endorsed by Sugar Busters, LLC”.  Inside, the front page carries yet another disclaimer, “The validity of Sugar Busters, LLC’s claim of federal trademark rights to the term “Sugar Busters” is acknowledged.”  No doubt these legal disclaimers were a part of the settlement, but one thing is for sure, the name “Brennan” appears on the front cover of Ellen’s book no less than seven times.

Lest you miss the point, these are recipes from the Brennan restaurant franchise, and the fact that they are low sugar and low carb is incidental.  Good food is good food, and my Number One Fan made this dish worthy of a page in the annals of Kitchen Tapestry.  The only modifications we made to Ellen’s original recipe was in substituting beef broth and red wine for water, adding more tomato paste and backing off the Tabasco a little.  Otherwise, this is fundamentally the same recipe.

There is no explanation as to why this dish has the geographic moniker of San Antonio when it comes from a restaurant in a different state. If anything, the very existence of a Louisiana mirepoix – sometimes called the Holy Trinity – namely onion, green bell pepper and celery, would specifically qualify this as a Louisiana dish. In fact, there are a number of similar recipes on the Internet that call themselves Cajun Pot Roast, which might have been more apropos.

The Recipe
Preheat the oven to 325 degrees.

Pat the roast dry with paper towels. In a large oven-proof dutch oven, heat the oil until shimmering. Liberally salt and pepper the roast, then lower it into the fat and brown the beef on both sides, searing the meat, about four minutes on each side.

Remove the meat from the pot onto a platter, and then saute the onion, celery and green bell pepper in the hot oil until they pick up some color, about ten minutes. Season the vegetables with the smoked salt and more black pepper. Add the garlic and tomato paste to the vegetables and saute for three more minutes, stirring constantly. Then, pour in all liquids and stir well to get up the crusty bits from the bottom of the dutch oven. Bring the liquid to a simmer.

Return the beef roast to the braising liquid. Cover with a tight fitting lid and place in the pre-heated oven for 6 to 7 hours. Check the roast about half way through the cooking period and add another cup of beef broth if needed.

The meat should easily shred when fully cooked and there shouldn’t be a lot of liquid left.  Serve over mock garlic mashed potatoes if you’re on a low carb diet.  Click here to get the recipe. Otherwise, this dish would go well over cheese grits, rice or mashed potatoes.  To be more San Antonio about it, you could even serve it with four tortillas, wrapped around the shredded beef and garnished with diced fresh tomato, freshly chopped cilantro and a dollop of sour cream.