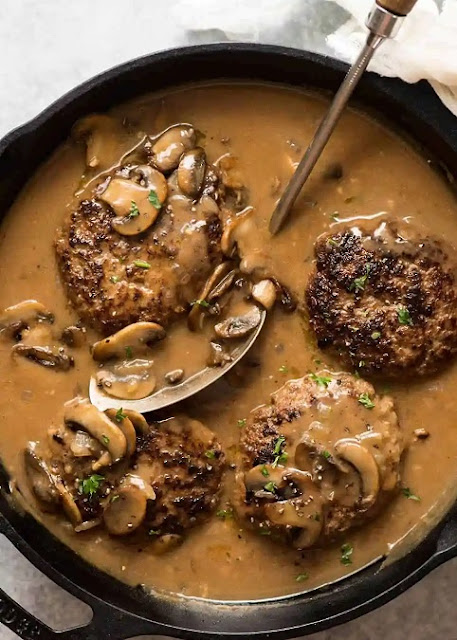 Don’t confuse Salisbury Steak with Swiss Steak.  A lot of people do, which is understandable since both are beef entrees that have been simmered in a sauce and are perfectly accompanied by mashed potatoes, rice or noodles.  Both gained popularity in the 1950s and ’60s with the advent of frozen TV dinners and were a staple of school lunch lines and commercial cafeterias.

But the similarities end there.  Swiss steak is a child of the Great Depression when less desirable and more inexpensive cuts of beef lured American cooks to engage in the verb known a “swissing” which means to take a meat mallet to tough cuts of beef round or sirloin, beat the hell out of them, and then slow braise them in a tomato-based sauce.  I’ve expanded on the history and attributes of the dish here.

Salisbury Steak, on the other hand, was born in the Civil War and is named, in fact, after its creator, Dr. James Henry Salisbury.  He was a student of gastrointestinal health and was able to surmise that Union soldiers were dying of malnutrition as much as they were of battle wounds because their diet didn’t contain enough animal protein, and specifically, beef, or more finitely, chopped beef, believing the latter to be more digestible. Dr. Salisbury, in essence, created the world’s first hamburger. After the war, he wrote a book called The Relation of Alimentation and Disease which was one of the first studies of the link between health and a balanced diet, which included animal proteins rich in B vitamins.

But is Salisbury Steak merely a hamburger patty smothered in gravy?  No. In fact, the US Department of Agriculture has specific guidelines about what constitutes a Salisbury Steak, including fillers such as bread, oats or flour.  I’ll forgo a recitation of the federal regulations and just say that Salisbury Steak more closely resembles a single serving meatloaf that has been browned in a skillet and then simmered in an onion-mushroom gravy.  And that’s where a lot of people get Swiss Steak wrong.  Instead of a tomato based sauce, which is a fundamental requirement in order to be authentically called “Swiss Steak,” they take license to borrow the gravy that quintessentially makes a mini meatloaf Salisbury Steak.

Don’t get me wrong.  There is nothing wrong with any of that, but if you’re going to call your dish Swiss Steak or Salisbury Steak, stick to the traditions of the recipe or otherwise change the name of the it.  After all, a Margarita made with Rum instead of Tequila is called a Daiquiri. 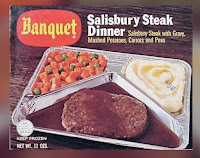 To be sure, the first time I ever heard of Salisbury Steak was around 1964-65 when my mother had to return to a full time job as a registered nurse and TV Dinners pretty much became standard fare. At ten years old, I had the wherewithal to heat a couple of them up in the oven for me and my kid brother a couple of times a week before mom and dad got home from work.  Admittedly, Salisbury Steak was not my favorite.  I much preferred the Fried Chicken, Roast Turkey and Dressing and especially, the “Mexican Style Dinner” with a beef enchilada, two beef tamales, Mexican rice, frijoles refritos and something that billed itself as “authentic pepper sauce.”  Good times.

The Recipe
Break up the ground chuck into pieces in a large mixing bowl. Add all the other ingredients for the Salisbury Steaks except the olive oil. Using wet hands, mix everything together until well combined. Form four patties with your hands and set in the fridge to rest for 20 minutes.

You will need a skillet with a lid large enough to hold the four patties and all other ingredients for the gravy.  Heat the olive oil over medium heat.

Place the patties into the hot oil and brown each side for a couple of minutes.  Do not cook all the way through.  Remove the patties to a platter.

Add the butter to the olive oil and sauté the onions until translucent and beginning to caramelize, about ten minutes. Add the mushrooms and sauté for another 4-5 minutes.

Add the beef broth and stock, the reserved half-packet of dried onion soup, the Kitchen Bouquet, ketchup, mustard and spices and blend everything together well.  Bring to a strong simmer.

Make sure the flour is thoroughly suspended in the cold water (this is called a slurry in culinary parlance).  Pour a third of it at a time while constantly stirring the gravy, which will begin to thicken as the it bubbles away.  Add more slurry until the gravy is of a consistency to coat the back of a spoon.

Nestle the Salisbury Steaks into the gravy, lower the heat to the stove’s lowest possible setting, put the lid on the skillet and let it simmer gently for thirty minutes. Finish with the parsley in the last five minutes of cooking.

If you want the true TV dinner experience, serve along side mashed potatoes and mixed green peas and diced carrots. Serve on aluminum foil.