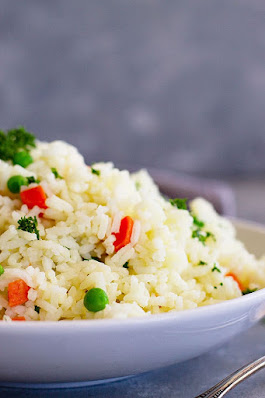 Rice Pilaf is called by maybe twenty other names in other countries and is as varied in its ingredients as the imagination will allow.  It has a lengthy history and is thought to have spread over a vast region of Asia and the Middle East in the 700s.  The Armies of Alexander the Great are believed to have been largely responsible for bringing the concept to the Mediterranean.  The earliest documented recipe of a Rice Pilaf came from Persia in the tenth century.

Today, Rice Pilaf recipes on the Internet are incredibly varied to the extent that the only common denominator is, well, rice.  And all types of rice may be considered here, but generally Basmati rice is favored because it is less sticky and holds up well to sauces and other ingredients.  My version calls for two cups of white rice.  Use whatever.  You can make your rice from scratch or use a microwaveable pouch of white rice.  I had a pouch of Uncle Ben’s Basmati rice, which held about two cups, and that worked well.  I also recommend frozen green peas, not canned which are overcooked and mushy.  Just zap 1/2 cup frozen green peas in the microwave for 30 seconds before adding them to the dish.

This recipe is as simple to make as it is an elegant side dish for, in this case, my Broiled Salmon with Avocado Cream Sauce, found here.

The Recipe
Melt the butter in a skillet over medium high heat.

Saute the red bell pepper and the onion for 8-10 minutes until the onion is starting to pick up a little caramelized color.

Add the pecans, peas and dried parsley, then toss in the rice and stir well to combine.  Allow the mixture to heat through for a couple of minutes.

For drama on your dinner plate, use a small ramekin as a mold for the Pilaf. Pack the ramekin tightly with the rice mixture, then quickly turn it over onto the plate.