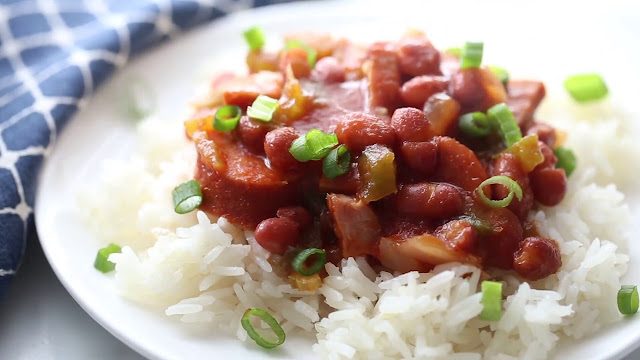 Fat Tuesday is the final day of decadence and lack of restraint before buckling down and doing some serious atonement for your sins during Lent. It is the culmination of the season known as Mardi Gras.  Tomorrow, you’ll perhaps have ashes applied to your forehead and spend the next six weeks denying yourself of all pleasurable things until Easter.  It ‘s all part of the guilt trip known as the Catholic religion. But the origins of Mardi Gras actually date much further back than the emergence of the Church of Rome, with many historians believing that celebrations of feasting and debauchery began in ancient pagan rituals of spring and fertility.  Regardless, the Cajuns of New Orleans know how to party and have created some fabulous culinary creations to help you usher in a season of abnegation.

Red Beans and Rice had humble beginnings and probably sprung from slave fare where there was little meat to share.  Somewhere along the way, humans figured out that beans and rice, when eaten together, form a completed chain of amino acids that constitute the same protein as is found in meat, poultry, seafood and dairy products.  Beans and rice recipes exist in almost endless varieties in almost every culture. But Red Beans and Rice is distinctly from the bayous of southern Louisianan. While the dish may have started out as vegetarian, it didn’t end up that way once the Cajuns had their say.  Today, no self-respecting Red Beans & Rice recipe is made without the addition of andouille sausage, a spicy, smoky pork sausage that New Orleans adopted as its own centuries ago.

In the days of yore, red beans were made on Mondays utilizing pork bones and scraps that accumulated from Sunday dinner.  It might have even sat on a hearth for days, providing sustenance throughout the week. Today, Red Beans & Rice is standard New Orleans fare available almost anywhere, any day and every great New Orleans chef has their own take on what is really a very simple dish.

The recipe below is an amalgamation of a number of recipes that I researched, borrowing an idea from one that was promoted on the Food Chanel website by Valerie Bertinell.  Since she’s from Delaware and of Italian descent, I’m not too sure why she received a nod from the Food Channel for posting a classically New Orleans dish, but she did inspire me with suggesting you use a smoked pork shank alongside the andouille.  I was terribly enthusiastic to actually find a smoked pork shank at my neighborhood butcher shop while I was shopping for the andouille! Not only did the shank impart a wonderful smoky flavor to the dish, the meat became incredibly tender and literally fell away from the bone, providing an added dimension to the flavors and textures of the beans and andouille sausage.

If you cannot find a smoked pork shank, the aforementioned andouille will carry the day and you’ll be just as proud of your results.

The Recipe
Pre-heat your Crock Pot or slow cooker by filling with very hot tap water and setting on high for an hour while you prepare the beans.

Rinse the beans and sort through for any pebble or debris.  Put in a large sauce pot, cover with water by a couple of inches and bring the pot to a rolling boil over high heat for two minutes.  Turn off the heat and allow the beans to sit covered for one hour.  Drain thoroughly.

In the same stock pot, melt the butter over medium high heat, and saute the onions, green bell pepper and celery until the onions become translucent and  begin to pick up a little caramel color.

Put the smoked pork shank in a covered microwave-safe dish, and zap for three minutes.

Drain the Crock Pot, and add the smoked pork shank, the cooked onions, bell pepper and celery, and all remaining ingredients except the green onion.  If you need more liquid, add additional chicken broth or water, filling the Crock Pot to within 1/2 inch from the top.

Cover and cook on high for three hours, then on low for an additional six hours.

Use whatever kind of rice you like. The meat of the pork shank will have fallen away from the bone, or you can nudge it away gently with a serving spoon.  You can also use your serving spoon to cut the pork meat into bite-sized pieces.  Remove the shank bone and bay leaves from the beans before spooning over the rice in a large soup bowl.  Garnish with the chopped green onions.

As they say on Fat Tuesday (and just about any other time in New Orleans), “Laissez les bon temps rouler!”  Let the good times roll!