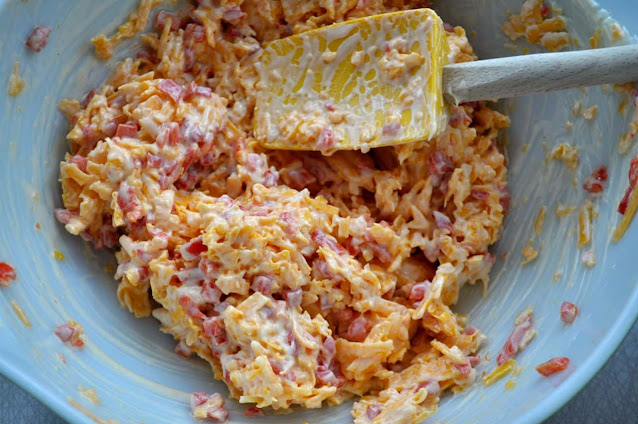 One typically thinks of pimento cheese as a Southern thing, but it actually has roots in upstate New York. In the 1870s, farmers in that state began producing a cheese called French Neufchâtel, the forerunner of what later became known to us as cream cheese. Around the same time, sweet peppers from Spain, called pimientos, became readily available and popular. Eventually, the extra “i” was dropped and the peppers became known in America as pimentos.

In 1908, Good Housekeeping ran a magazine article on sandwiches and recommended mixing cream cheese with mustard, chives and minced pimento.  Pimento cheese was born and soon became commercially available by the turn of that decade.  It gained in popularity in places as far away from New York as New Mexico, Oregon, Alabama and South Carolina.

But in 1911, farmers in Georgia began experimenting with growing the pimento pepper on US soil, which greatly reduced its cost, and is thought to be the beginning of the South’s adoption of this versatile cheese spread that is undeniably good on bread as a sandwich, on crackers, celery sticks and these days, even as an accompaniment to hamburgers. Pimento cheese has undergone something of a culinary resurgence in the last decade or so.

My Number One Fan is fond of pimento cheese and Price’s Pimento Cheese seems to be a staple in our refrigerator.  Price’s was founded in 1959 by a Texas couple that had a great recipe and at some point, their brand was acquired by the third largest cheese manufacturer in the US, the Bel Brands USA, which has its roots in France.

But Price’s actually doesn’t use Pimento peppers; it uses red bell peppers and contains corn starch and high fructose corn syrup.  My Number One Fan was seeking a healthier, more genuine alternative and created this recipe. It is an amalgamation of several recipes she researched on the internet, as well as one other homemade version she’s been making for several years.

The Recipe
Put everything in a mixing bowl and using a rubber spatula or an electric cake mixer, blend all ingredients well. Allow to chill for at least an hour before serving.