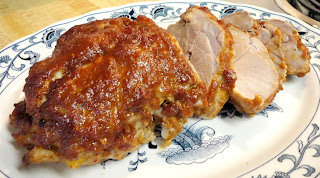 My friend, Julie, is quite the cook and always brings something great to eat whenever she visits.  Last time, she gave us a jar of homemade “Spiced Peach Preserves.”  I was wondering what I would do with it, since I am not a bread and jelly eater.  I had a sudden stroke of ah-ha, and created this recipe, using her jar of preserves.  Asking for the recipe so I could recreate it, I publish it here.  This made a pork roast that was deliciously flavorful and tender.  Fast forward several months when I wanted to make this recipe again but didn’t have the time to make the peach preserves, I bought a high-end jar of peach preserves, heated the contents of the whole jar in a skillet and stirred in about a teaspoon of ground cloves and ground cinnamon.  Julie’s was better, but this was close.

The Recipes
First, make the peach preserves:
Chop and de-seed the peaches and throw in a heavy pot.  Add the sugar and lemon juice and bring to a boil.  Lower the heat and simmer for an hour until the preserves are the consistency you want.  Bear in mind, they thicken when they cook, so take a spoonful out and let it cool so you know what you’re working with.

If you are going to can your peach preserves, your jars, lids and rings must be sterilized in boiling water.  Keep the jars in the hot water while you fill them with the preserves.  Wipe the rims clean.  Then, put the lids and rings on tightly and turn the jar upside down on a dish towel to seal.  After about an hour, turn the jar over and the jars will seal due to the vacuum that has been created in the jar as the mixture cooled.

If you don’t want to can your peach preserves, just put in plastic containers and refrigerate or freeze.

Now, to make pork roast:
Using a dutch-oven or roasting dish with a heavy lid, spray down the interior with non-stick cooking spray.

Liberally salt and pepper the roast, then slather on the peach preserves over the top and sides of the meat.

Add the port wine to the roast, slap on a lid, and put in a 325 degree oven for five to six hours.  Remove the lid for the last hour of cooking so the top of the roast becomes bubbly and slightly crisp.