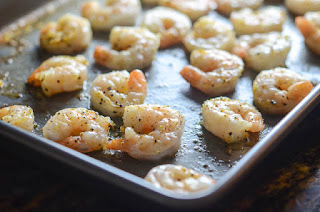 My Number One Fan found this very easy and versatile recipe on the damndelicious.net website and it was intended as a shrimp cocktail.  While you can certainly eat these babies solo, we actually made them as a topper to My Version of Caesar’s Salad, a recipe I posted some years ago.  They would also go well over pasta or noodles, methinks.  We always have a couple of bags of frozen peeled, deveined shrimp on hand, so this will be an easy, anytime go-to recipe for us.  And given the heat of the summer months, enjoying these on a cold, fresh, crisp Caesar’s Salad was just perfect.  The original recipe called for fresh parsley and fresh lemon juice to be spritzed over the shrimp after removing from the oven.  We did neither of those.  We used dried parsley because that’s what we have on hand, and we mixed the lemon juice in with everything else on the front-end of the recipe.  Why complicate things?

Using a small whisk, mix everything except the shrimp in a mixing bowl so you have a consistent paste.  Then toss in the shrimp and coat them well with the seasoning mixture.

If you are using thawed, previously frozen shrimp, make sure they are
dried well.  After thawing mine, I wrapped up in a couple of paper
towels and applied a bit of pressure to get rid of the excess moisture.

Lay the shrimp out in a single layer on a sheet pan or cookie sheet. You really do not need to use any non-stick cooking spray on the sheet pan since the shrimp are already well coated in olive oil.

Cook for about ten minutes until the shrimp are done.  I also turned on the broiler for a couple of minutes just to pick up a little char, but you can skip this step if you want.