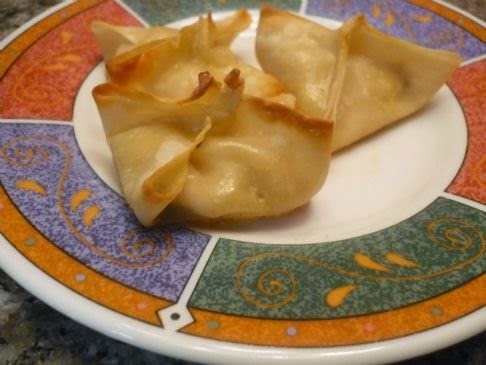 This recipe originally was posted on an unknown website visited by my Number One Fan called, “Baked Cream Cheese Won-tons” and they were made with shrimp.  When I read it, I realized this was an amended version of a classic Cantonese appetizer I’ve seen on countless Chinese restaurant menus, Crab Rangoon.  I was intrigued with the oven baking cooking process since frying anything is just an enormous pain in terms of set-up, calorie count and clean-up.  Paired with a Chinese New Year dinner of Asian Shrimp Spring Rolls, and these little gems were a nice accompaniment and came out pretty darn good.

As a dipping sauce, you need something that imparts sweet and heat.  You could use any variety of marmalade, mixed with some hot Chinese mustard.  I just happen to have on hand some La Choy Sweet and Sour sauce, and mixed in some Coleman’s mustard.  I thought it worked quite well.

The Recipe
Preheat oven to 400 degrees.  Lightly spray a sheet pan or baking sheet with the non-stick spray.

To assemble the Rangoon, place a won-ton wrapper on a work surface and spoon in about a teaspoon of the crab mixture in the center.  Using your finger, rub the edges of the won-ton wrapper with the egg.  Fold all sides over the filling to create an ‘X’, pinching the edges to seal.

Place the won-tons in a single layer on the baking sheet and coat the won-tons with a light shot of the cooking spray.

Bake in the preheated over 10-12 minutes until the Rangoons are brown and crisp.

Serve hot with the dipping sauce.